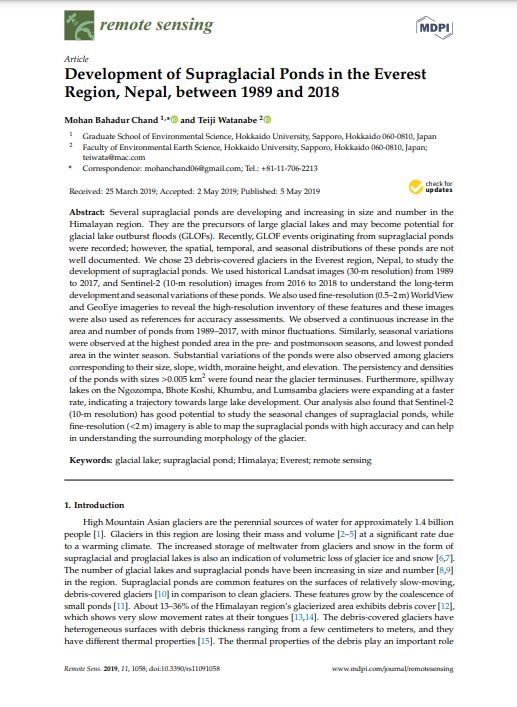 Development of Supraglacial Ponds in the Everest Region, Nepal, between 1989 and 2018

Several supraglacial ponds are developing and increasing in size and number in the Himalayan region. They are the precursors of large glacial lakes and may become potential for glacial lake outburst floods (GLOFs). Recently, GLOF events originating from supraglacial ponds were recorded; however, the spatial, temporal, and seasonal distributions of these ponds are not well documented. We chose 23 debris-covered glaciers in the Everest region, Nepal, to study the development of supraglacial ponds. We used historical Landsat images (30-m resolution) from 1989 to 2017, and Sentinel-2 (10-m resolution) images from 2016 to 2018 to understand the long-term development and seasonal variations of these ponds. We also used fine-resolution (0.5–2 m) WorldView and GeoEye imageries to reveal the high-resolution inventory of these features and these images were also used as references for accuracy assessments. We observed a continuous increase in the area and number of ponds from 1989–2017, with minor fluctuations. Similarly, seasonal variations were observed at the highest ponded area in the pre- and postmonsoon seasons, and lowest ponded area in the winter season. Substantial variations of the ponds were also observed among glaciers corresponding to their size, slope, width, moraine height, and elevation. The persistency and densities of the ponds with sizes >0.005 km2 were found near the glacier terminuses. Furthermore, spillway lakes on the Ngozompa, Bhote Koshi, Khumbu, and Lumsamba glaciers were expanding at a faster rate, indicating a trajectory towards large lake development. Our analysis also found that Sentinel-2 (10-m resolution) has good potential to study the seasonal changes of supraglacial ponds, while fine-resolution (<2 m) imagery is able to map the supraglacial ponds with high accuracy and can help in understanding the surrounding morphology of the glacier.