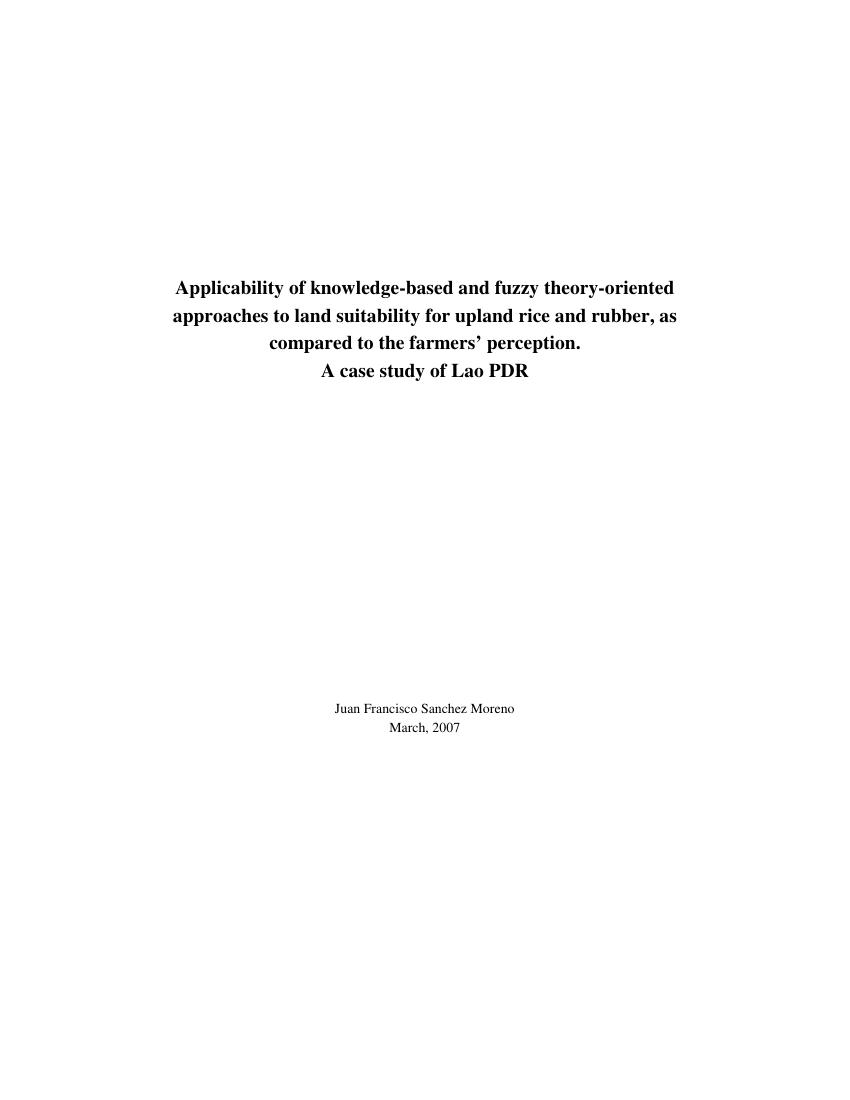 Applicability of knowledge-based and fuzzy theory-oriented approaches to land suitability for upland rice and rubber, as compared to the farmers? perception: A case study of Lao PDR

Food security and extra income are among the main concerns of farmers in least developed countries such as Lao PDR. Around 80% of the population depends on agriculture as main source of subsistence, being rice the staple food and principal crop. The topography conditions and narrow valleys of the country compel the farmers to cultivate upland rice over paddy. In recent years, the interest of China in latex has encouraged Lao farmers to plant rubber, but there is a lack of knowledge about its requirements and processing. Given the importance of upland rainfed rice and the interest on rubber, in this research the suitability of these two crops has been assessed using three different approaches: first a knowledge-based suitability prepared by farmers, second a traditional Boolean suitability classification performed using the Automated Land Evaluation System ALES, and third a fuzzy-based evaluation. In the first approach the farmers created soil maps based on their experience, then determined suitable crops according to their soil units. In the Boolean approach, ALES employs the FAO framework for Land Evaluation (1976) that defines suitability classes from land qualities and land characteristics. For the fuzzy model, the same land qualities and land characteristics defined in the Boolean approach were used. Different fuzzy membership functions obtained from the literature were employed and the weights for each parameter were calculated according to an Analytic Hierarchy Process (APH) that relies on pairwise comparisons. Information retrieved from field surveys was an input to define the land qualities for the models, as a result fallow was one of the main parameters to be considered; then the Boolean and fuzzy models were run for three hypothetical fallow periods. The three different suitability visions were compared on a cell by cell basis. The results show that the in the Boolean model the best conditions for upland rainfed rice are given with no fallow (S2 for 61% of the study area), while for rubber are given for a medium fallow period (S1 for 21% of the study area). In contrast, the potential suitability under the Boolean model gives a 2.8% of the total study area as highly suitable for rice and 24% as highly suitable for rubber. The results with the fuzzy theory show 50% of the study area as highly suitable for upland rice and 24% as highly suitable for rubber. The comparison between the three approaches reveals a moderate agreement between the fuzzy and Boolean models that varies with the fallow period, being the best correlation for rubber under medium fallow period (54% agreement, kappa 0.38). The comparison with the farmers? suitability shows a better agreement for upland rice (38%) than for rubber (22%) but with an agreement given completely by chance (negative kappa values). It seems that the low agreements have to do with the lack of knowledge on rubber and in the traditional use given to the land. In this study it has been concluded that the inclusion of farmers? knowledge allows obtaining results that seem to correspond with the current conditions in the area.
1,931 Views
570 Downloads