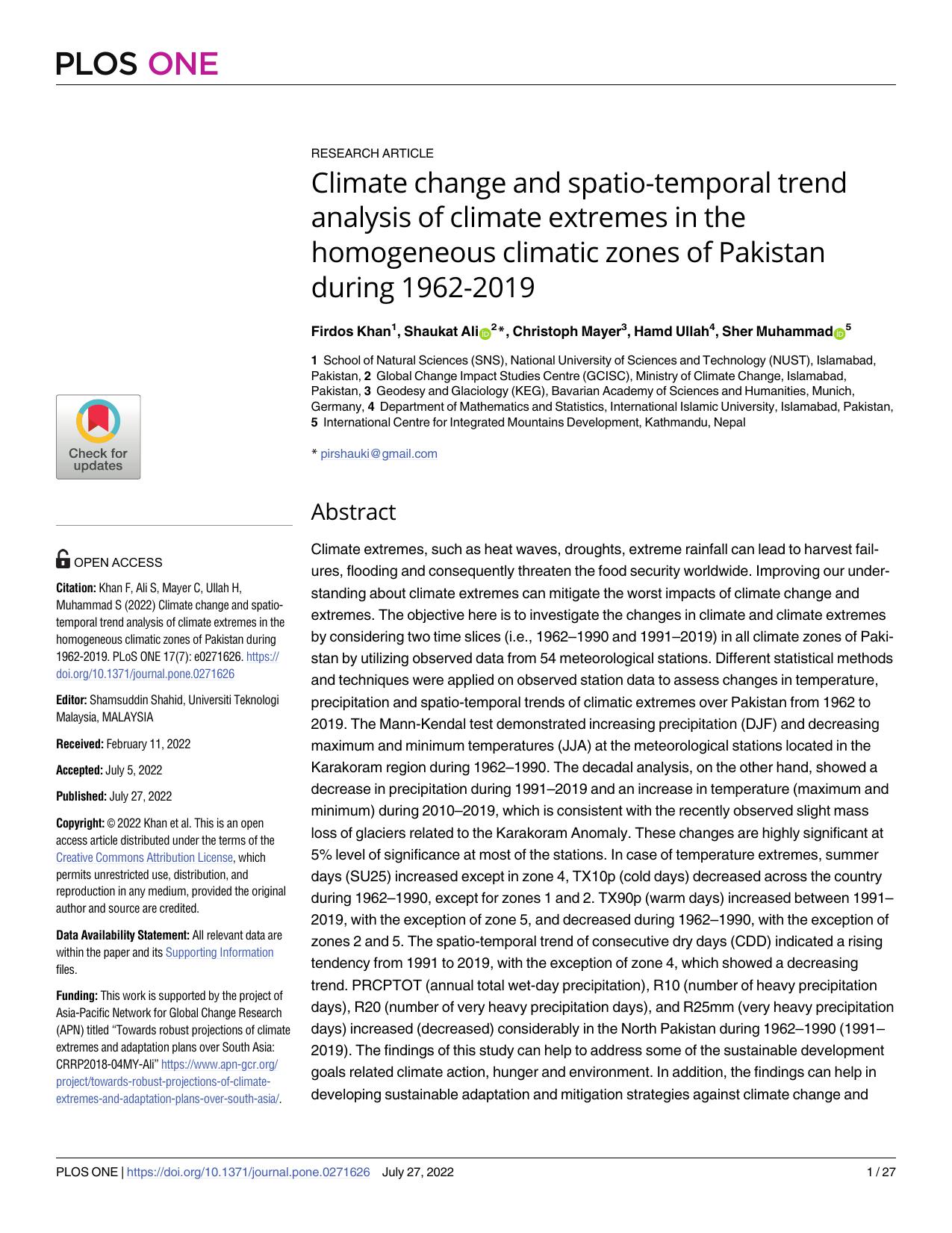 Climate extremes, such as heat waves, droughts, extreme rainfall can lead to harvest failures, flooding and consequently threaten the food security worldwide. Improving our understanding about climate extremes can mitigate the worst impacts of climate change and extremes. The objective here is to investigate the changes in climate and climate extremes by considering two time slices (i.e., 1962–1990 and 1991–2019) in all climate zones of Pakistan by utilizing observed data from 54 meteorological stations. Different statistical methods and techniques were applied on observed station data to assess changes in temperature, precipitation and spatio-temporal trends of climatic extremes over Pakistan from 1962 to 2019. The Mann-Kendal test demonstrated increasing precipitation (DJF) and decreasing maximum and minimum temperatures (JJA) at the meteorological stations located in the Karakoram region during 1962–1990. The decadal analysis, on the other hand, showed a decrease in precipitation during 1991–2019 and an increase in temperature (maximum and minimum) during 2010–2019, which is consistent with the recently observed slight mass loss of glaciers related to the Karakoram Anomaly. These changes are highly significant at 5% level of significance at most of the stations. In case of temperature extremes, summer days (SU25) increased except in zone 4, TX10p (cold days) decreased across the country during 1962–1990, except for zones 1 and 2. TX90p (warm days) increased between 1991–2019, with the exception of zone 5, and decreased during 1962–1990, with the exception of zones 2 and 5. The spatio-temporal trend of consecutive dry days (CDD) indicated a rising tendency from 1991 to 2019, with the exception of zone 4, which showed a decreasing trend. PRCPTOT (annual total wet-day precipitation), R10 (number of heavy precipitation days), R20 (number of very heavy precipitation days), and R25mm (very heavy precipitation days) increased (decreased) considerably in the North Pakistan during 1962–1990 (1991–2019). The findings of this study can help to address some of the sustainable development goals related climate action, hunger and environment. In addition, the findings can help in developing sustainable adaptation and mitigation strategies against climate change and extremes. As the climate and extremes conditions are not the uniform in all climate zone, therefore, it is suggested to the formers and agriculture department to harvest crops resilient to the climatic condition of each zone. Temperature has increasing trend in the northern Pakistan, therefore, the concerned stakeholders need to make rational plans for higher river flow/flood situation due to snow and glacier melt. Copyright: © 2022 Khan et al. This is an open access article distributed under the terms of the Creative Commons Attribution License, which permits unrestricted use, distribution, and reproduction in any medium, provided the original author and source are credited.