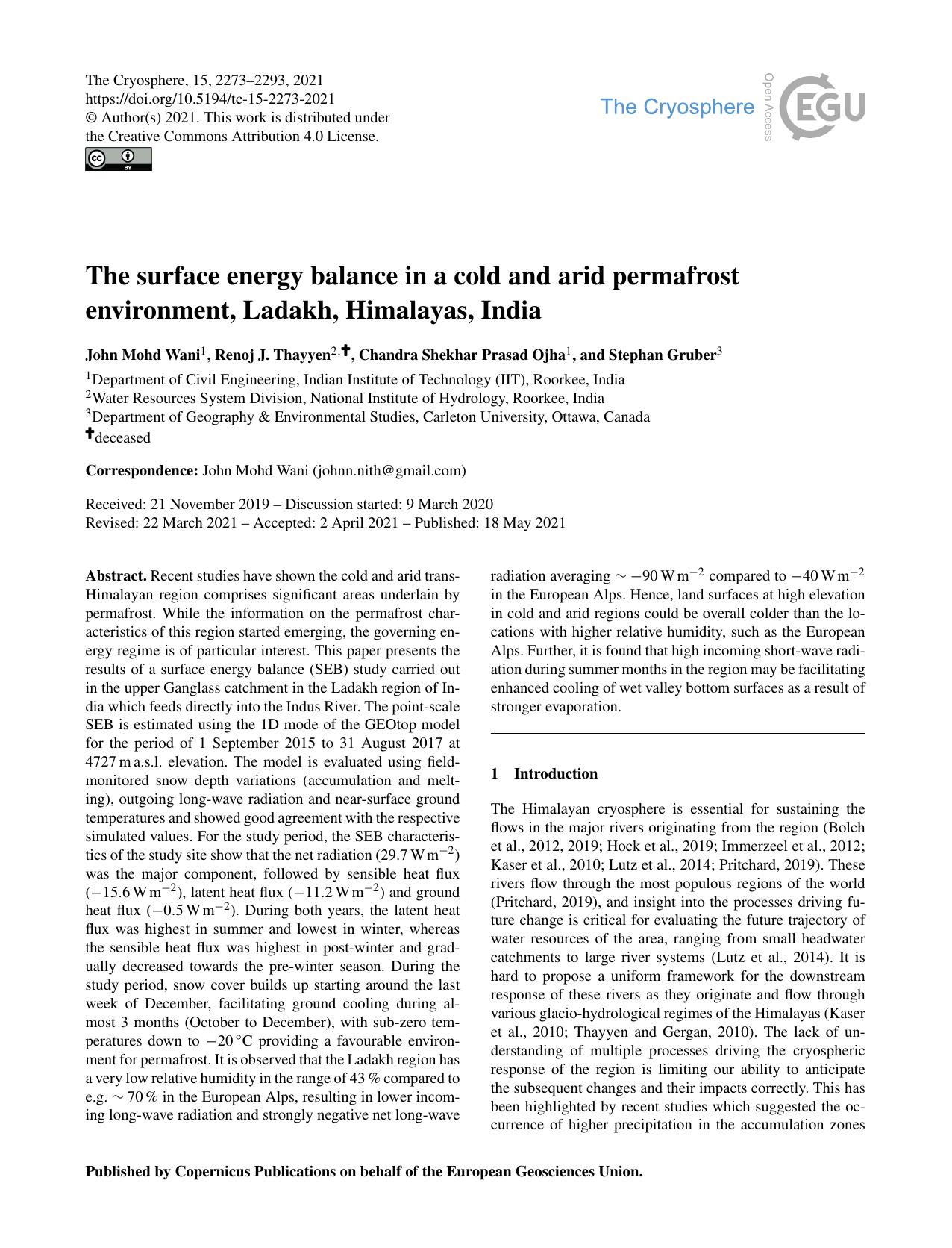 Recent studies have shown the cold and arid trans-Himalayan region comprises significant areas underlain by permafrost. While the information on the permafrost characteristics of this region started emerging, the governing energy regime is of particular interest. This paper presents the results of a surface energy balance (SEB) study carried out in the upper Ganglass catchment in the Ladakh region of India which feeds directly into the Indus River. The point-scale SEB is estimated using the 1D mode of the GEOtop model for the period of 1 September 2015 to 31 August 2017 at 4727 m a.s.l. elevation. The model is evaluated using field-monitored snow depth variations (accumulation and melting), outgoing long-wave radiation and near-surface ground temperatures and showed good agreement with the respective simulated values. For the study period, the SEB characteristics of the study site show that the net radiation (29.7 W m−2) was the major component, followed by sensible heat flux (−15.6 W m−2), latent heat flux (−11.2 W m−2) and ground heat flux (−0.5 W m−2). During both years, the latent heat flux was highest in summer and lowest in winter, whereas the sensible heat flux was highest in post-winter and gradually decreased towards the pre-winter season. During the study period, snow cover builds up starting around the last week of December, facilitating ground cooling during almost 3 months (October to December), with sub-zero temperatures down to −20 ∘C providing a favourable environment for permafrost. It is observed that the Ladakh region has a very low relative humidity in the range of 43 % compared to e.g. ∼70 % in the European Alps, resulting in lower incoming long-wave radiation and strongly negative net long-wave radiation averaging ∼−90 W m−2 compared to −40 W m−2 in the European Alps. Hence, land surfaces at high elevation in cold and arid regions could be overall colder than the locations with higher relative humidity, such as the European Alps. Further, it is found that high incoming short-wave radiation during summer months in the region may be facilitating enhanced cooling of wet valley bottom surfaces as a result of stronger evaporation.