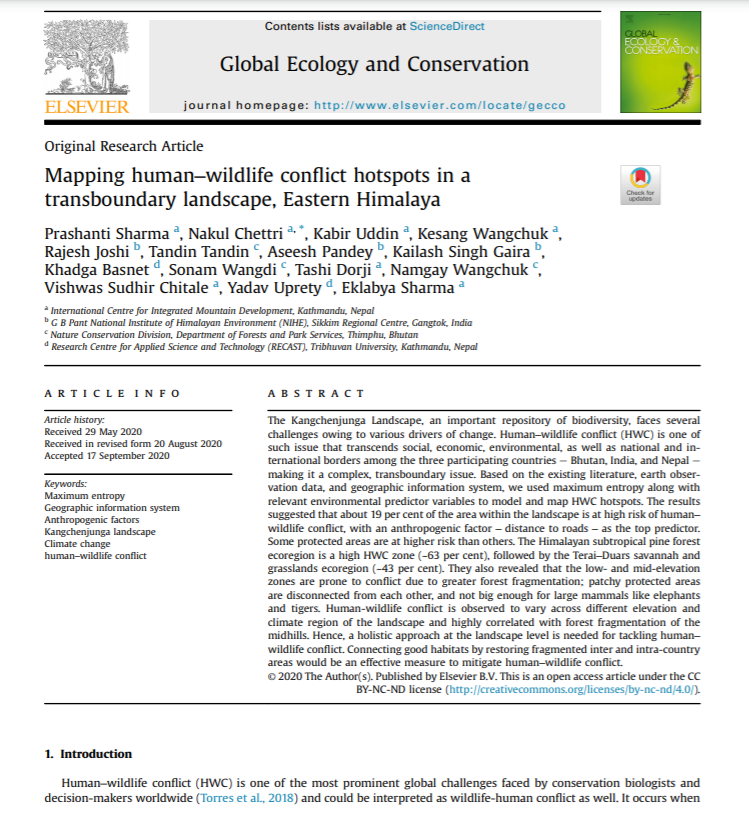 The Kangchenjunga Landscape, an important repository of biodiversity, faces several challenges owing to various drivers of change. Human‒wildlife conflict (HWC) is one such issue that transcends social, economic, environmental, as well as national and international borders among the three participating countries – Bhutan, India, and Nepal – making it a complex, transboundary issue. Based on the existing literature, earth observation data, and geographic information system, we used maximum entropy along with relevant environmental predictor variables to model and map HWC hotspots. The results suggested that about 19 per cent of the area within the landscape is at high risk of human‒wildlife conflict, with an anthropogenic factor ‒ distance to roads ‒ as the top predictor. Some protected areas are at higher risk than others. The Himalayan subtropical pine forest ecoregion is a high HWC zone (∼ 63 per cent), followed by the Terai‒Duars savannah and grasslands ecoregion (∼43 per cent). They also revealed that the low- and mid-elevation zones are prone to conflict due to greater forest fragmentation; patchy protected areas are disconnected from each other, and not big enough for large mammals like elephants and tigers. In the context of climate change, a likely upward shift in vegetation could place additional pressure on mid-hill areas. Hence, a holistic approach at the landscape level is needed for tackling human‒wildlife conflict. Connecting good habitats by restoring fragmented inter- and intra-country habitats would be an effective measure to mitigate human‒wildlife conflict.