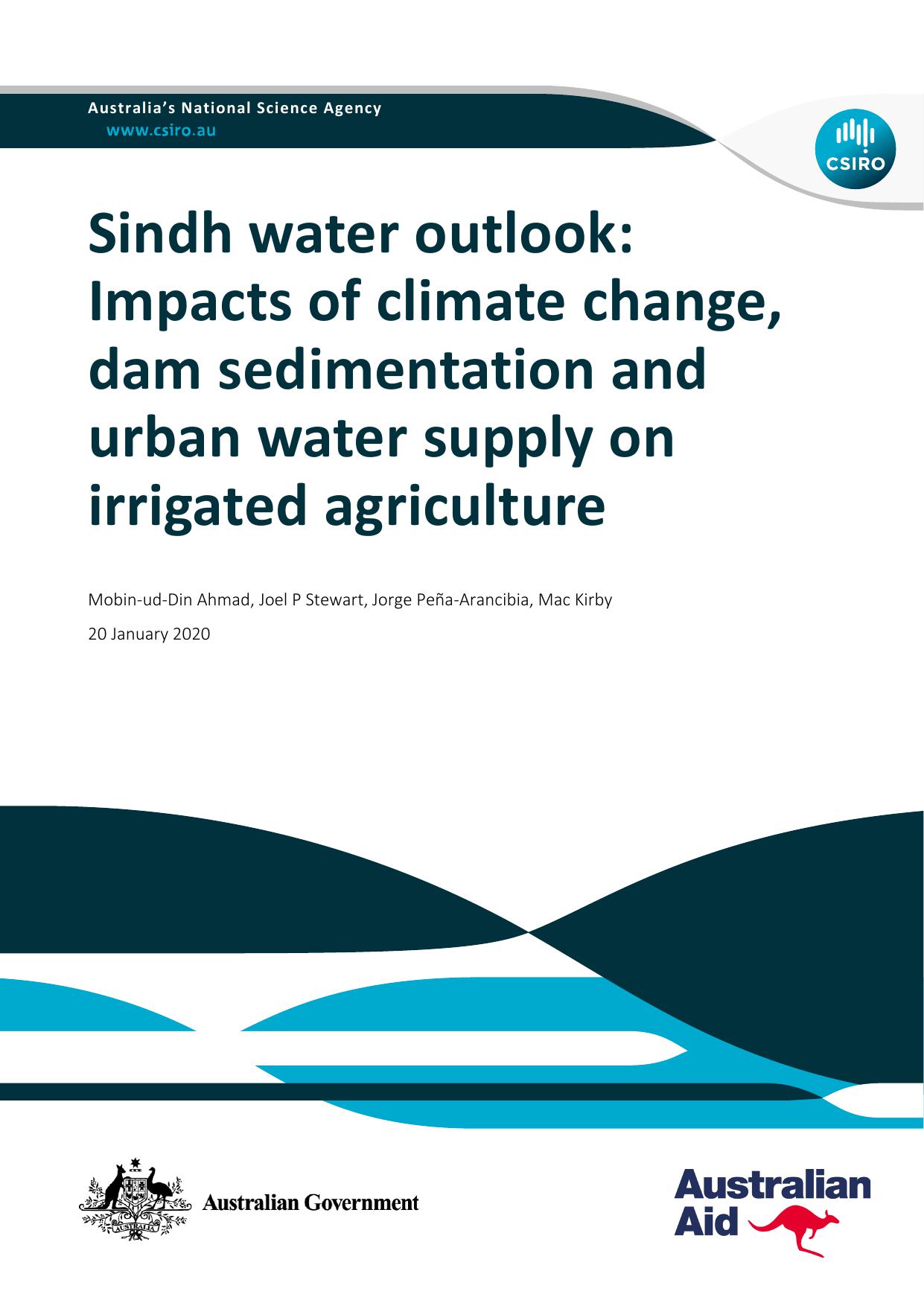 This report used measured estimates of rainfall, actual evapotranspiration, canal deliveries and change in groundwater levels to assess the water balance of the canal commands in Sindh, plus the Pat and desert canals in Balochistan that are supplied from the Guddu barrage in Sindh. The canal deliveries are the main supply of water into the canal commands, whereas the use of groundwater is insignificant, as evidenced by the change in groundwater levels. However, the sum of the measured water balance terms left a large residual of error or unknown water. There is also uncertainty in the assessment of evapotranspiration, and we used two remote sensing methods for assessing it. We then assessed the relative change to the annual and seasonal (Rabi and Kharif) water balance from the historical baseline of projected (modelled) future rainfall, actual evapotranspiration, and canal deliveries as affected by climate change in the Upper Indus and in Sindh province, as affected by sedimentation in the main irrigation supply dams, and as affected by increasing the supply of water to Karachi from the Indus River. These changes were captured as a set of 12 exploratory future scenarios. The study employed a simple approximate method for calculating the change in the area of crops required to use the available water. The exploratory scenario analysis shows that the influence of flows on canal deliveries generally had the largest impact on the water balance, followed by the no dams scenario, then the sedimentation scenarios, then the climate change in Sindh scenarios, and lastly the scenarios of increased urban water supply to Karachi. While this is the general picture, in some seasons the order of the magnitude of some effects is reversed. The analysis also showed that while the actual evapotranspiration estimated by two methods (ETLook and CMRSET) differed, the changes to the water balance were almost the same for the two methods. Therefore, the choice of method of actual evapotranspiration estimation made almost no difference to the results. We conclude that water availability in Sindh may increase or decrease due to climate change in the Upper Indus Basin and due to local climate change in Sindh. Sedimentation of dam storages is projected to lead to reduced water availability in the Rabi season, since there is a lesser volume of storage to supply Rabi crop demands, and increased availability in Kharif since there is a lesser volume of storage to capture the large Kharif river flows. A greater future supply of water to Karachi could lead to small reductions in the overall availability of water for irrigation in Sindh (potentially of about 3 % of canal supplies, if all the future water is sourced from the Indus). In the Kharif season, the potential increases in water availability are generally larger than the potential decreases. Conversely, in the Rabi season, the potential increases in water availability are generally smaller than the potential decreases. The potential reductions in crop area in the Rabi season in response to lesser water availability are projected to amount to about 230 000 ha in several scenarios. The extreme case of loss of dam storage altogether (without the added impact of other scenarios) could amount to a loss of Rabi water availability equivalent to 55 % of the wheat crop, 94 % of the fodder crop, or more than the area of sugarcane. Several strategies will help deal with the impacts, including changing the areas of crops, changing the mix of crops to lower water using crops, finding alternative water sources for Karachi, improving the efficiency of water delivery via the canals, improving crop productivity, and controlling sedimentation in dams.
333 Views
1 Downloads