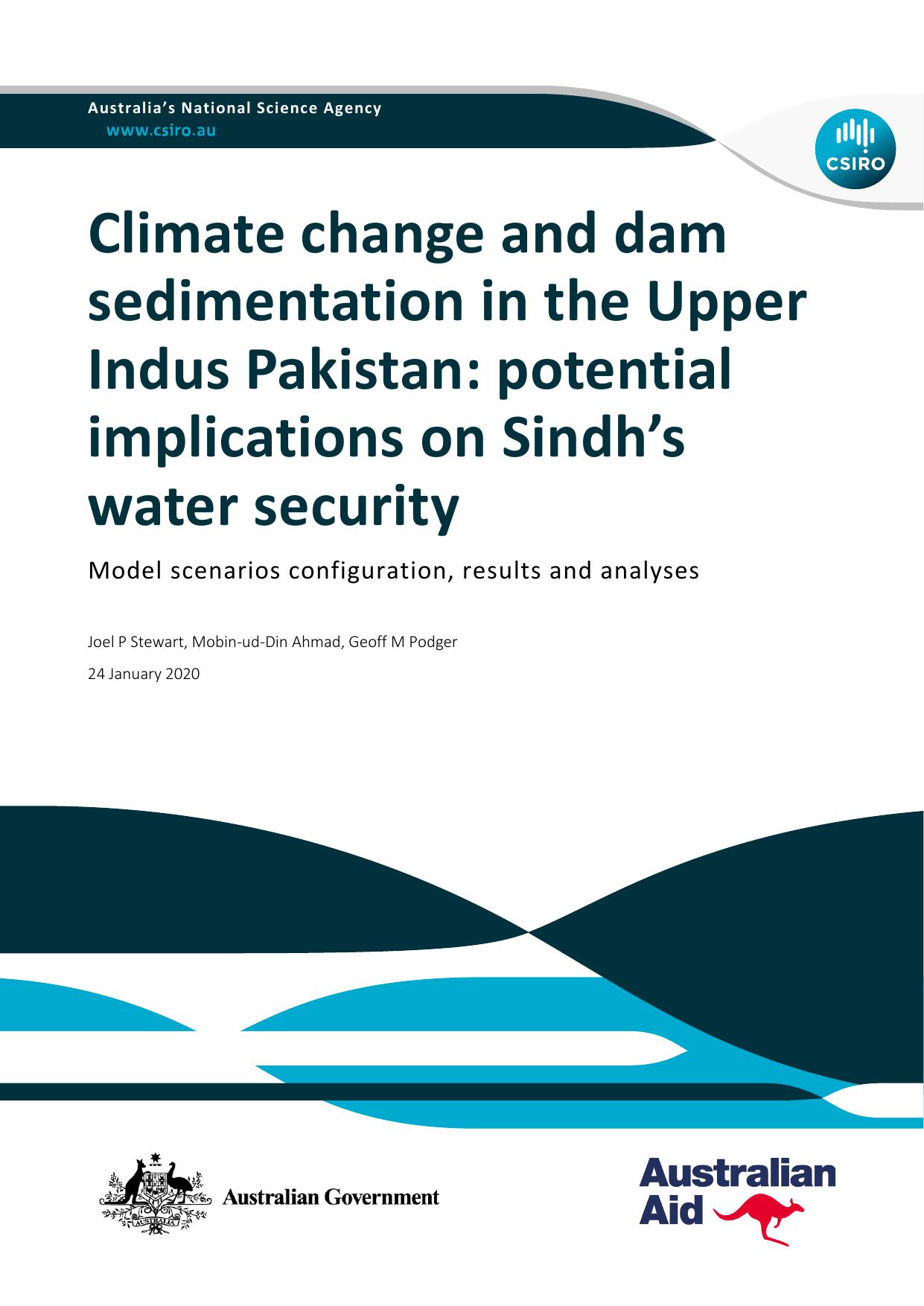 This Report presents the methods and results of exploratory climate change and storage reduction model scenarios for the province of Sindh in Pakistan. The scenarios utilise the daily time step Indus River System Model (IRSM), which simulates seasonal planning, provincial allocation and distribution of the waters to individual canal commands across all of Pakistan. Climate change modelling was undertaken using a delta scaling method, whereby a selection of published climate change modelling scenarios describing potential changes to flows in the upper Indus were analysed to characterise potential changes to mean annual and 10-day flow patterns at rim stations at 2050. These potential hydrological changes were assessed for eight climate change scenarios representative of the range from climate change models. The mean annual and 10-day scaling patterns were then applied to a historical rim station inflow sequence which was simulated in the IRSM to assess potential changes in water deliveries to canal commands in Sindh. Storage reduction model scenarios were undertaken to represent the potential reduction in storage volume in Tarbela and Mangla as a result of sedimentation by 2050. Storage volumes of these two major dams were assessed over time with linear regressions used to estimate the projected available storage volumes for 2050 model scenarios. The resultant storage volumes were installed in the IRSM for these future model scenarios, in addition to a ‘no storage’ scenario whereby only 1% of storage of the major dams remained. The model scenario assessments in this report are presented as relative changes to the baseline. The baseline is represented by the IRSM simulation of the period 1990-2017 using historical daily rim station inflows and includes the period over which the model was first calibrated (2007-2012). The change from baseline results of 18 scenarios are presented in this report including: • 2 scenarios for storage reduction representing 2050 storage and the ‘no storage’ scenario • 8 climate change scenarios with fixed 2019 storage levels • 8 climate change scenarios with fixed 2050 storage volumes. The model scenario results show: • Potential changes to the flow patterns under climate change are highly variable with a similar number of scenarios indicating moderate increases in flows and deliveries as those indicating potential decreases in flows and deliveries. These results represent a range of possibilities rather than a likelihood of occurrence. • Potential changes to seasonality under climate change modelling indicate increases in early Kharif flows, reduction in mid Kharif flows and increases in very late Kharif flows. Rabi flows show both increases and decreases in flows. • Active volume at 2050 in Tarbela is anticipated to be 2.86 MAF at 1550 ft, down from 5.99 MAF in 2018. Active volume at 2050 in Mangla is anticipated to be 6.44 MAF at 1242 ft, down from 7.356 MAF in 2018. Total storage reduction for the 2050 scenario is therefore 4.046 MAF. The change in available storage volume is much more certain than climate change impacts and results in approximately 14% less water available in Rabi for canal commands in Sindh. These results indicate that changes to available stored water impact the planning and delivery of water to Sindh; have more potential impact than potential seasonal changes in flows from climate change; and will need to be managed in the future.
229 Views
3 Downloads