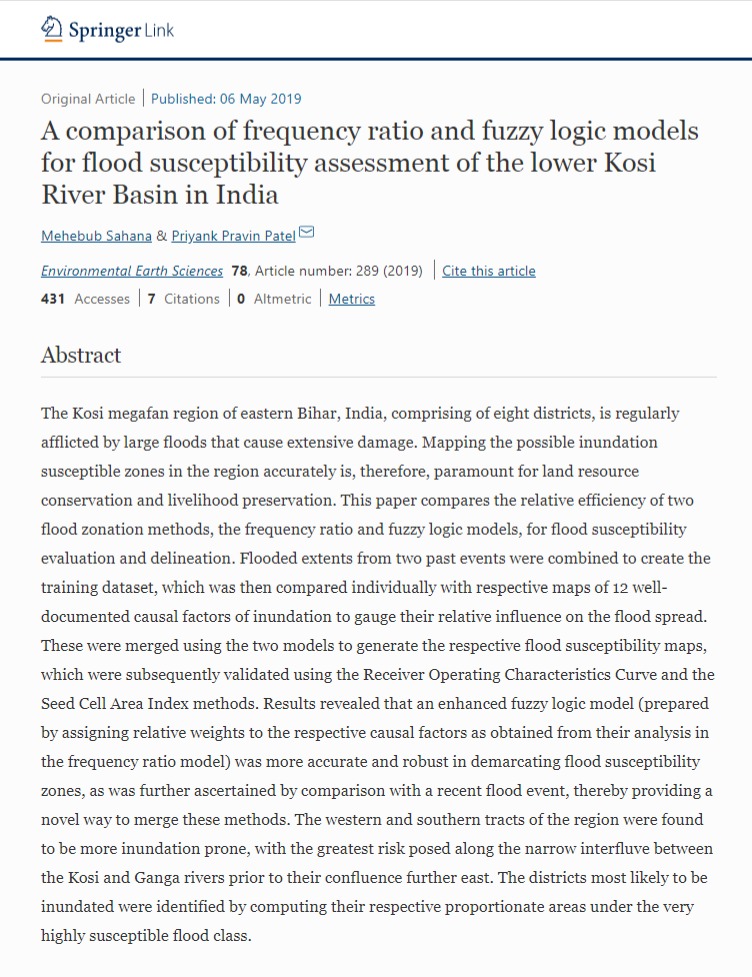 The Kosi megafan region of eastern Bihar, India, comprising of eight districts, is regularly afflicted by large floods that cause extensive damage. Mapping the possible inundation susceptible zones in the region accurately is, therefore, paramount for land resource conservation and livelihood preservation. This paper compares the relative efficiency of two flood zonation methods, the frequency ratio and fuzzy logic models, for flood susceptibility evaluation and delineation. Flooded extents from two past events were combined to create the training dataset, which was then compared individually with respective maps of 12 well-documented causal factors of inundation to gauge their relative influence on the flood spread. These were merged using the two models to generate the respective flood susceptibility maps, which were subsequently validated using the Receiver Operating Characteristics Curve and the Seed Cell Area Index methods. Results revealed that an enhanced fuzzy logic model (prepared by assigning relative weights to the respective causal factors as obtained from their analysis in the frequency ratio model) was more accurate and robust in demarcating flood susceptibility zones, as was further ascertained by comparison with a recent flood event, thereby providing a novel way to merge these methods. The western and southern tracts of the region were found to be more inundation prone, with the greatest risk posed along the narrow interfluve between the Kosi and Ganga rivers prior to their confluence further east. The districts most likely to be inundated were identified by computing their respective proportionate areas under the very highly susceptible flood class. © 2019, Springer-Verlag GmbH Germany, part of Springer Nature.