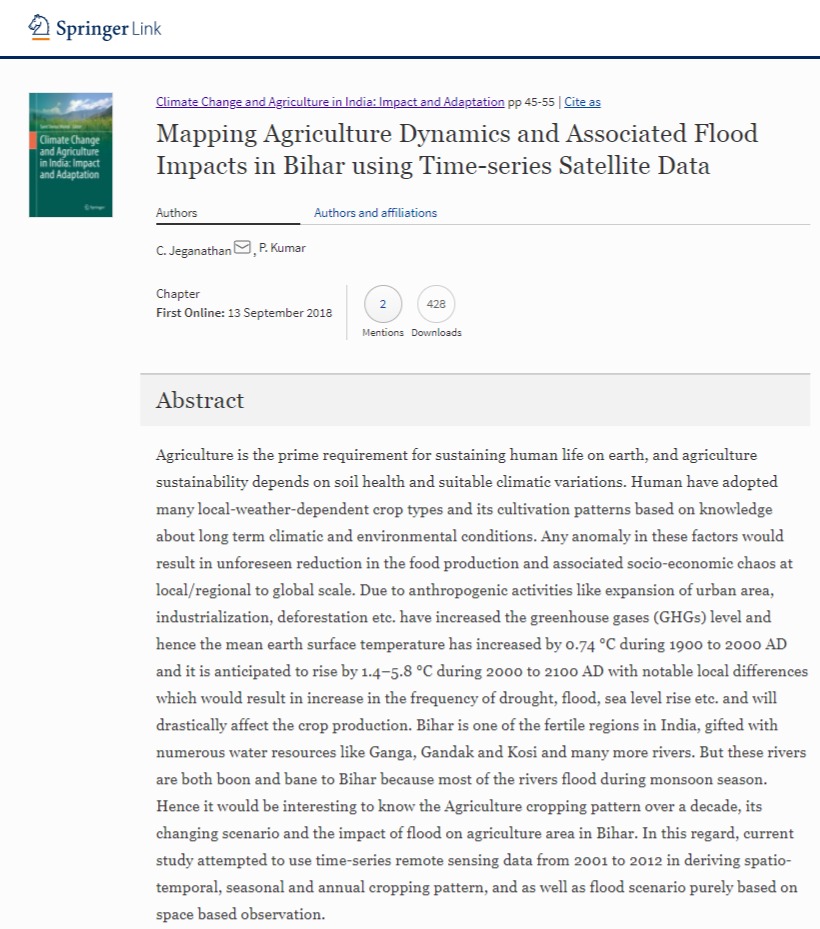 Agriculture is the prime requirement for sustaining human life on earth, and agriculture sustainability depends on soil health and suitable climatic variations. Human have adopted many local-weather-dependent crop types and its cultivation patterns based on knowledge about long term climatic and environmental conditions. Any anomaly in these factors would result in unforeseen reduction in the food production and associated socio-economic chaos at local/regional to global scale. Due to anthropogenic activities like expansion of urban area, industrialization, deforestation etc. have increased the greenhouse gases (GHGs) level and hence the mean earth surface temperature has increased by 0.74 °C during 1900 to 2000 AD and it is anticipated to rise by 1.4–5.8 °C during 2000 to 2100 AD with notable local differences which would result in increase in the frequency of drought, food, sea level rise etc. and will drastically affect the crop production. Bihar is one of the fertile regions in India, gifted with numerous water resources like Ganga, Gandak and Kosi and many more rivers. But these rivers are both boon and bane to Bihar because most of the rivers food during monsoon season. Hence it would be interesting to know the Agriculture cropping pattern over a decade, its changing scenario and the impact of food on agriculture area in Bihar. In this regard, current study attempted to use time-series remote sensing data from 2001 to 2012 in deriving spatio-temporal, seasonal and annual cropping pattern, and as well as food scenario purely based on space based observation. © Springer International Publishing AG, part of Springer Nature 2019.