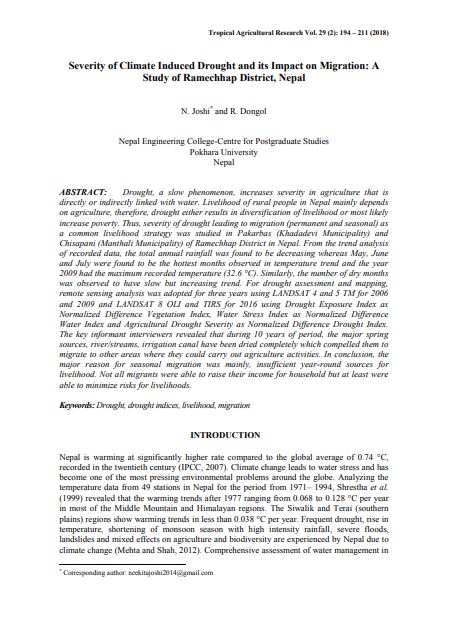 Severity of Climate Induced Drought and Its Impact on Migration: A Study of Ramechhap District, Nepal

Drought, a slow phenomenon, increases severity in agriculture that is directly or indirectly linked with water. Livelihood of rural people in Nepal mainly depends on agriculture, therefore, drought either results in diversification of livelihood or most likely increase poverty. Thus, severity of drought leading to migration (permanent and seasonal) as a common livelihood strategy was studied in Pakarbas (Khadadevi Municipality) and Chisapani (Manthali Municipality) of Ramechhap District in Nepal. From the trend analysis of recorded data, the total annual rainfall was found to be decreasing whereas May, June and July were found to be the hottest months observed in temperature trend and the year 2009 had the maximum recorded temperature (32.6 °C). Similarly, the number of dry months was observed to have slow but increasing trend. For drought assessment and mapping, remote sensing analysis was adopted for three years using LANDSAT 4 and 5 TM for 2006 and 2009 and LANDSAT 8 OLI and TIRS for 2016 using Drought Exposure Index as Normalized Difference Vegetation Index, Water Stress Index as Normalized Difference Water Index and Agricultural Drought Severity as Normalized Difference Drought Index. The key informant interviewers revealed that during 10 years of period, the major spring sources, river/streams, irrigation canal have been dried completely which compelled them to migrate to other areas where they could carry out agriculture activities. In conclusion, the major reason for seasonal migration was mainly, insufficient year-round sources for livelihood. Not all migrants were able to raise their income for household but at least were able to minimize risks for livelihoods.