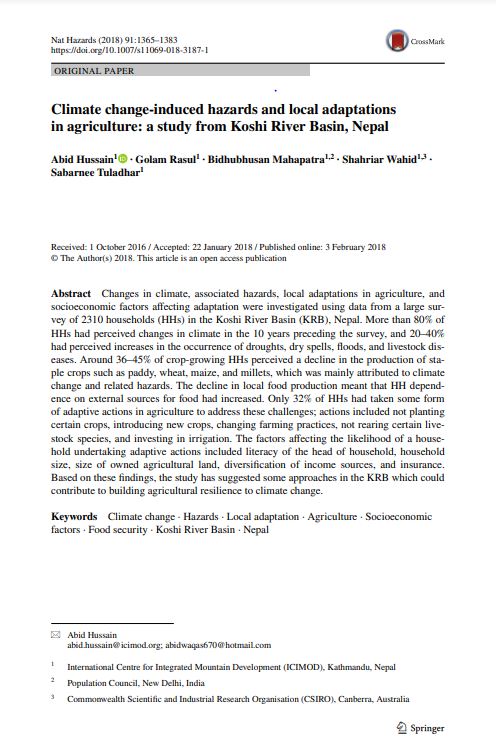 Changes in climate, associated hazards, local adaptations in agriculture, and socioeconomic factors affecting adaptation were investigated using data from a large survey of 2310 households (HHs) in the Koshi River Basin (KRB), Nepal. More than 80% of HHs had perceived changes in climate in the 10 years preceding the survey, and 20–40% had perceived increases in the occurrence of droughts, dry spells, floods, and livestock diseases. Around 36–45% of crop-growing HHs perceived a decline in the production of staple crops such as paddy, wheat, maize, and millets, which was mainly attributed to climate change and related hazards. The decline in local food production meant that HH dependence on external sources for food had increased. Only 32% of HHs had taken some form of adaptive actions in agriculture to address these challenges; actions included not planting certain crops, introducing new crops, changing farming practices, not rearing certain livestock species, and investing in irrigation. The factors affecting the likelihood of a household undertaking adaptive actions included literacy of the head of household, household size, size of owned agricultural land, diversification of income sources, and insurance. Based on these findings, the study has suggested some approaches in the KRB which could contribute to building agricultural resilience to climate change.