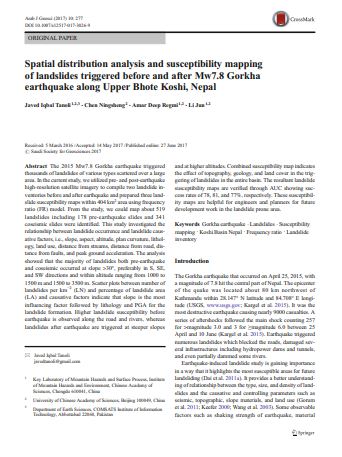 Spatial Distribution Analysis and Susceptibility Mapping of Landslides Triggered before and after Mw7.8 Gorkha Earthquake Along Upper Bhote Koshi, Nepal

The 2015 Mw7.8 Gorkha earthquake triggered thousands of landslides of various types scattered over a large area. In the current study, we utilized pre- and post-earthquake high-resolution satellite imagery to compile two landslide inventories before and after earthquake and prepared three landslide susceptibility maps within 404 km2 area using frequency ratio (FR) model. From the study, we could map about 519 landslides including 178 pre-earthquake slides and 341 coseismic slides were identified. This study investigated the relationship between landslide occurrence and landslide causative factors, i.e., slope, aspect, altitude, plan curvature, lithology, land use, distance from streams, distance from road, distance from faults, and peak ground acceleration. The analysis showed that the majority of landslides both pre-earthquake and coseismic occurred at slope >30°, preferably in S, SE, and SW directions and within altitude ranging from 1000 to 1500 m and 1500 to 3500 m. Scatter plots between number of landslides per km−2 (LN) and percentage of landslide area (LA) and causative factors indicate that slope is the most influencing factor followed by lithology and PGA for the landslide formation. Higher landslide susceptibility before earthquake is observed along the road and rivers, whereas landslides after earthquake are triggered at steeper slopes and at higher altitudes. Combined susceptibility map indicates the effect of topography, geology, and land cover in the triggering of landslides in the entire basin. The resultant landslide susceptibility maps are verified through AUC showing success rates of 78, 81, and 77%, respectively. These susceptibility maps are helpful for engineers and planners for future development work in the landslide prone area. © 2017, Saudi Society for Geosciences.