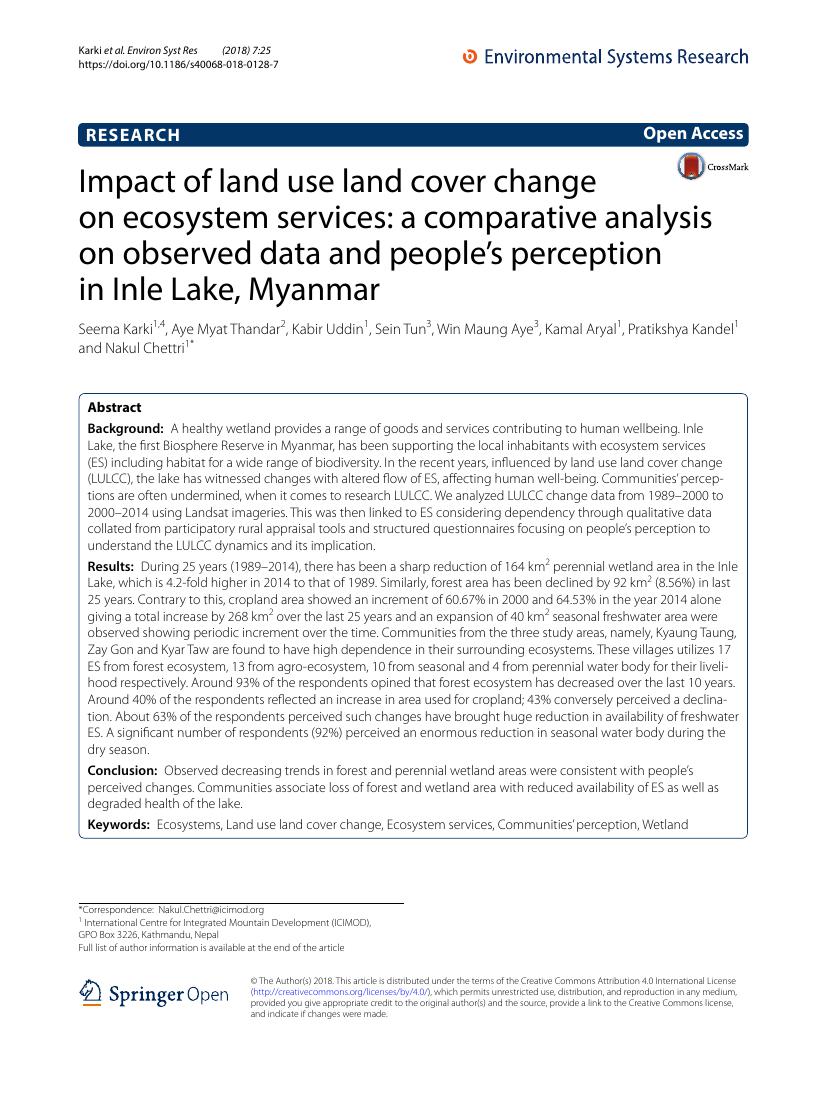 Impact of land use land cover change on ecosystem services: a comparative analysis on observed data and people’s perception in Inle Lake, Myanmar

Background
A healthy wetland provides a range of goods and services contributing to human wellbeing. Inle Lake, the first Biosphere Reserve in Myanmar, has been supporting the local inhabitants with ecosystem services (ES) including habitat for a wide range of biodiversity. In the recent years, influenced by land use land cover change (LULCC), the lake has witnessed changes with altered flow of ES, affecting human well-being. Communities’ perceptions are often undermined, when it comes to research LULCC. We analyzed LULCC change data from 1989–2000 to 2000–2014 using Landsat imageries. This was then linked to ES considering dependency through qualitative data collated from participatory rural appraisal tools and structured questionnaires focusing on people’s perception to understand the LULCC dynamics and its implication.

Results
During 25 years (1989–2014), there has been a sharp reduction of 164 km2 perennial wetland area in the Inle Lake, which is 4.2-fold higher in 2014 to that of 1989. Similarly, forest area has been declined by 92 km2 (8.56%) in last 25 years. Contrary to this, cropland area showed an increment of 60.67% in 2000 and 64.53% in the year 2014 alone giving a total increase by 268 km2 over the last 25 years and an expansion of 40 km2 seasonal freshwater area were observed showing periodic increment over the time. Communities from the three study areas, namely, Kyaung Taung, Zay Gon and Kyar Taw are found to have high dependence in their surrounding ecosystems. These villages utilizes 17 ES from forest ecosystem, 13 from agro-ecosystem, 10 from seasonal and 4 from perennial water body for their livelihood respectively. Around 93% of the respondents opined that forest ecosystem has decreased over the last 10 years. Around 40% of the respondents reflected an increase in area used for cropland; 43% conversely perceived a declination. About 63% of the respondents perceived such changes have brought huge reduction in availability of freshwater ES. A significant number of respondents (92%) perceived an enormous reduction in seasonal water body during the dry season.

Conclusion
Observed decreasing trends in forest and perennial wetland areas were consistent with people’s perceived changes. Communities associate loss of forest and wetland area with reduced availability of ES as well as degraded health of the lake.