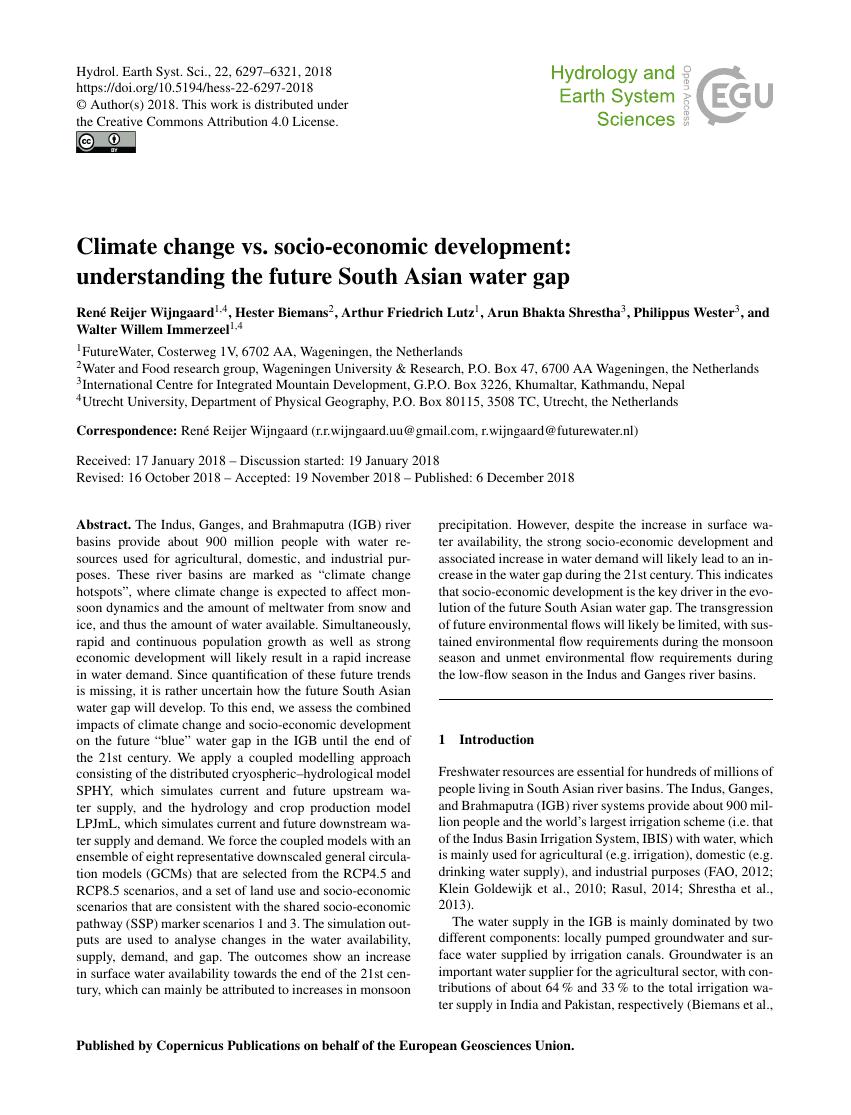 The Indus, Ganges, and Brahmaputra (IGB) river basins provide about 900 million people with water resources used for agricultural, domestic, and industrial purposes. These river basins are marked as “climate change hotspots”, where climate change is expected to affect monsoon dynamics and the amount of meltwater from snow and ice, and thus the amount of water available. Simultaneously, rapid and continuous population growth as well as strong economic development will likely result in a rapid increase in water demand. Since quantification of these future trends is missing, it is rather uncertain how the future South Asian water gap will develop. To this end, we assess the combined impacts of climate change and socio-economic development on the future “blue” water gap in the IGB until the end of the 21st century. We apply a coupled modelling approach consisting of the distributed cryospheric–hydrological model SPHY, which simulates current and future upstream water supply, and the hydrology and crop production model LPJmL, which simulates current and future downstream water supply and demand.We force the coupled models with an ensemble of eight representative downscaled general circulation models (GCMs) that are selected from the RCP4.5 and RCP8.5 scenarios, and a set of land use and socio-economic scenarios that are consistent with the shared socio-economic pathway (SSP) marker scenarios 1 and 3. The simulation outputs are used to analyse changes in the water availability, supply, demand, and gap. The outcomes show an increase in surface water availability towards the end of the 21st century, which can mainly be attributed to increases in monsoon precipitation. However, despite the increase in surface water availability, the strong socio-economic development and associated increase in water demand will likely lead to an increase in the water gap during the 21st century. This indicates that socio-economic development is the key driver in the evolution of the future South Asian water gap. The transgression of future environmental flows will likely be limited, with sustained environmental flow requirements during the monsoon season and unmet environmental flow requirements during the low-flow season in the Indus and Ganges river basins.