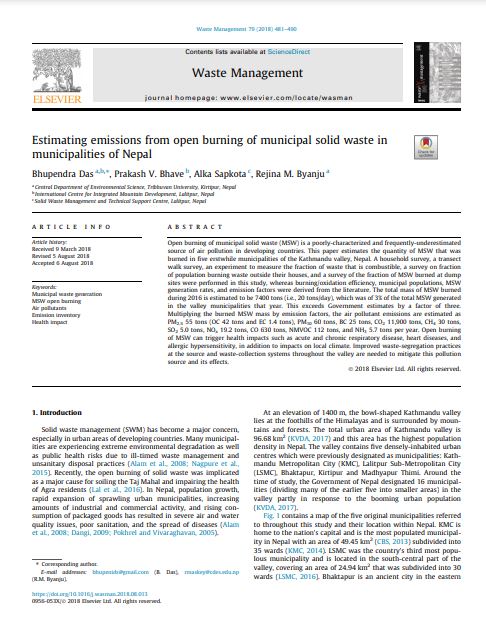 Open burning of municipal solid waste (MSW) is a poorly-characterized and frequently-underestimated source of air pollution in developing countries. This paper estimates the quantity of MSW that was burned in five erstwhile municipalities of the Kathmandu valley, Nepal. A household survey, a transect walk survey, an experiment to measure the fraction of waste that is combustible, a survey on fraction of population burning waste outside their houses, and a survey of the fraction of MSW burned at dump sites were performed in this study, whereas burning/oxidation efficiency, municipal populations, MSW generation rates, and emission factors were derived from the literature. The total mass of MSW burned during 2016 is estimated to be 7400 tons (i.e., 20 tons/day), which was of 3% of the total MSW generated in the valley municipalities that year. This exceeds Government estimates by a factor of three. Multiplying the burned MSW mass by emission factors, the air pollutant emissions are estimated as PM2.5 55 tons (OC 42 tons and EC 1.4 tons), PM10 60 tons, BC 25 tons, CO2 11,900 tons, CH4 30 tons, SO2 5.0 tons, NOx 19.2 tons, CO 630 tons, NMVOC 112 tons, and NH3 5.7 tons per year. Open burning of MSW can trigger health impacts such as acute and chronic respiratory disease, heart diseases, and allergic hypersensitivity, in addition to impacts on local climate. Improved waste-segregation practices at the source and waste-collection systems throughout the valley are needed to mitigate this pollution source and its effects.