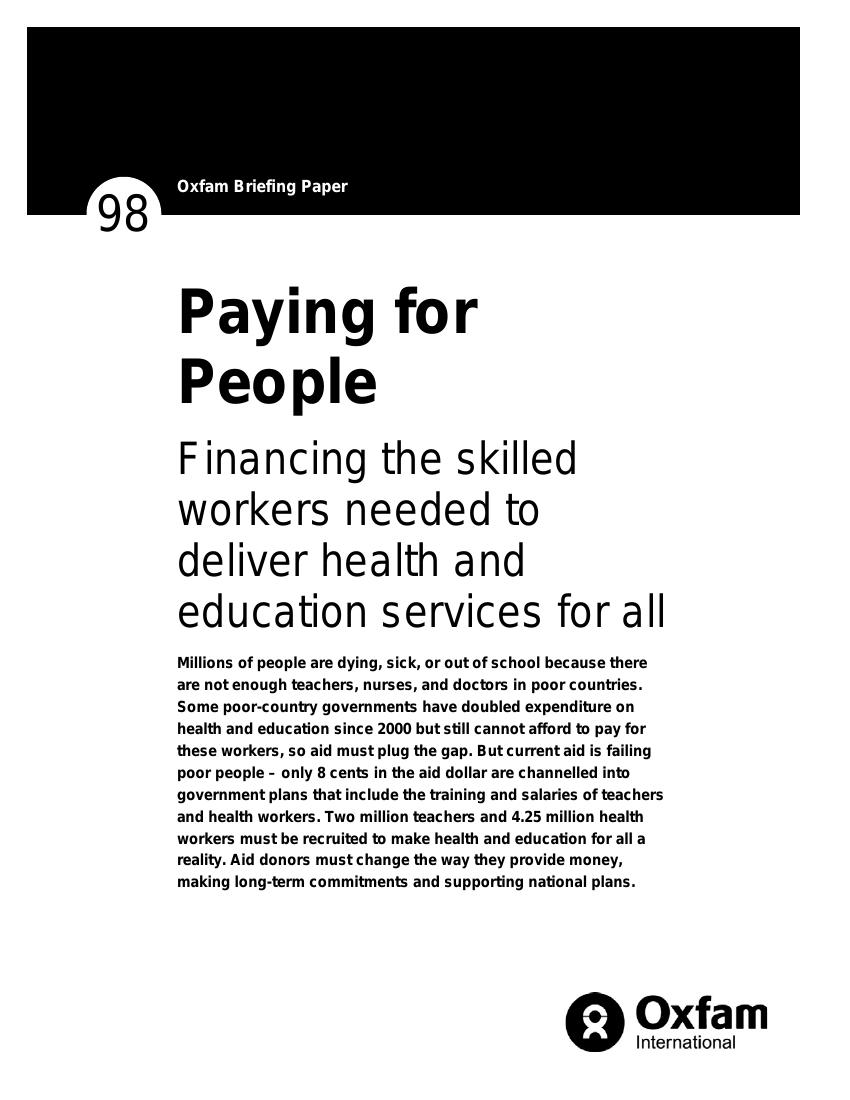 Paying for people: Financing the skilled workers needed to deliver health and education services for all

This is the first in a series of three papers that examines the financing of services in developing countries. This paper focuses on external assistance in the form of aid and debt cancellation. The other papers in the series will focus on internal revenues; first, receipts from taxation and then receipts from extractive industries.

Without health and education, poor women and men are denied the opportunity and ability to escape poverty. Health and education are basic rights, to which all citizens are entitled. But after decades of under-funding and ill-conceived reforms, these rights remain a distant dream for millions of people in the twenty-first century. Today, eighty million children are out of school. One thousand four hundred women will die in pregnancy or child-birth, with no access to professional care. In particular it is women and girls, poor people in rural areas, people with disabilities, and indigenous communities who are denied access to services, as well as the opportunity to be employed within them. Women and girls also pick up the burden of caring for sick relatives when health services fail.

Health and education systems are built of people. They cannot be fixed with technology alone. Even where there is no classroom, children can still be taught by a teacher. But where there is no teacher, then no amount of classrooms will ensure that children receive an education. Two million trained primary-school teachers are needed this year – and another two million each year until 2015. Today, over four million health professionals and support staff are needed, one-quarter of them in Africa. If things carry on as they are now, these gaps are not going to be filled. Meanwhile, a handful of workers struggle heroically to do their jobs on poverty wages and in appalling conditions. A government school teacher in Cameroon summed it up when talking to Oxfam staff in April 2006: ‘Becoming a teacher’, she said, ‘is like signing a contract with poverty’.

Only public investment has managed to achieve mass recruitment of teachers and health workers in the past, whether in industrial or developing nations. Even countries with low incomes have managed dramatic improvements in training and recruitment, with corresponding dramatic improvements in health and education results. The responsibility for delivering health and education rights through such mass scale-up rests squarely with governments. But in developing nations, international aid is needed to supplement shockingly low national income.

Some suitable support is arriving in the shape of debt cancellation and core funding for national government budgets or health and education sector budgets. Countries receiving highly indebted poor countries (HIPC) debt cancellations more than doubled their expenditure on poverty-reduction plans between 1999 and 2005. But too little aid is supporting national health and education plans in this way. Only 8 cents in the aid dollar goes towards helping governments to pay people to do the work that is needed. And the aid is too short-term to enable governments to make sensible investment plans, training their workers in the knowledge that aid money will be available to pay salaries when they qualify.

Donors should increase budget-support aid to 25 per cent of bilateral aid funding. They should increase core funding to the health and education sectors in countries where budget support is inappropriate. They should make commitments of at least six years and take steps to minimise the risks associated with budget aid. Full debt cancellations are still needed in 20 countries which are burdened with debts so great that they have no hope of achieving the Millennium Development Goals.

Poor-country governments have made huge progress in the last decade, increasing investment in health and education and employing thousands more workers. But they have also made promises to their citizens which are not being kept. They must aim for education expenditure of at least 20 per cent of national budgets and health expenditure of at least 15 per cent. More than ever, there is a need to ensure citizen representation and oversight to monitor public services and participate in local and national planning and budget processes.

The difficulty of assessing the progress of donors and governments is compounded by the lack of clear information. The World Health Organization has made good progress in analysing the approximate cost of recruiting and retaining health workers. UNESCO should now complete the same analysis for the teaching profession, so that there can be no doubt and no excuses.

These decisions require courage and commitment and cannot be delayed. Millions of lives are blighted and even extinguished by terrible poverty. World leaders have promised a radical change to the way that aid is used but so far their actions have fallen far short of the promises.