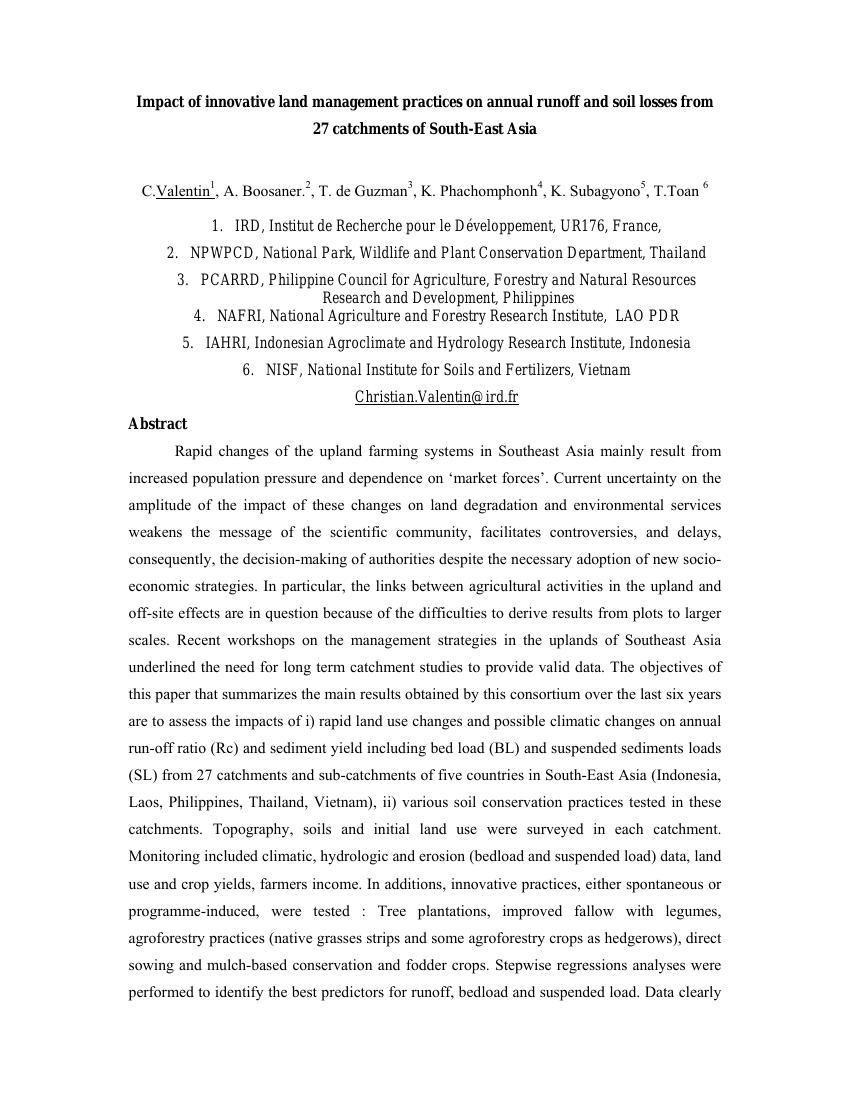 Rapid changes of the upland farming systems in Southeast Asia mainly result from increased population pressure and dependence on ‘market forces’. Current uncertainty on the amplitude of the impact of these changes on land degradation and environmental services weakens the message of the scientific community, facilitates controversies, and delays, consequently, the decision-making of authorities despite the necessary adoption of new socioeconomic strategies. In particular, the links between agricultural activities in the upland and off-site effects are in question because of the difficulties to derive results from plots to larger scales. Recent workshops on the management strategies in the uplands of Southeast Asia underlined the need for long term catchment studies to provide valid data. The objectives of this paper that summarizes the main results obtained by this consortium over the last six years are to assess the impacts of i) rapid land use changes and possible climatic changes on annual run-off ratio (Rc) and sediment yield including bed load (BL) and suspended sediments loads (SL) from 27 catchments and sub-catchments of five countries in South-East Asia (Indonesia, Laos, Philippines, Thailand, Vietnam), ii) various soil conservation practices tested in these catchments. Topography, soils and initial land use were surveyed in each catchment. Monitoring included climatic, hydrologic and erosion (bedload and suspended load) data, land use and crop yields, farmers income. In addition, innovative practices, either spontaneous or programme-induced, were tested: tree plantations, improved fallow with legumes, agroforestry practices (native grasses strips and some agroforestry crops as hedgerows), direct sowing and mulch-based conservation and fodder crops. Stepwise regressions analyses were performed to identify the best predictors for runoff, bedload and suspended load. Data clearly demonstrate that annual crops, especially maize and cassava, without conservation practices, promote soil erosion at the catchment scale. Annual crops in upland catchment have therefore an off-site impact on water quality. They epitomize the positive role of conservation technologies in reducing runoff and suspended load. Despite their efficiency in combating soil erosion, only few conservation techniques are adopted on the long term especially by tenant farmers. Our data suggest that soil erosion tends to increase with population density and more surprisingly with income per capita. If no incentives reward upland communities that adopt appropriate land use management systems, it is most likely that land degradation will increase in the next few decades with off-site consequences for more urban and industrialized lowland communities.
894 Views
82 Downloads