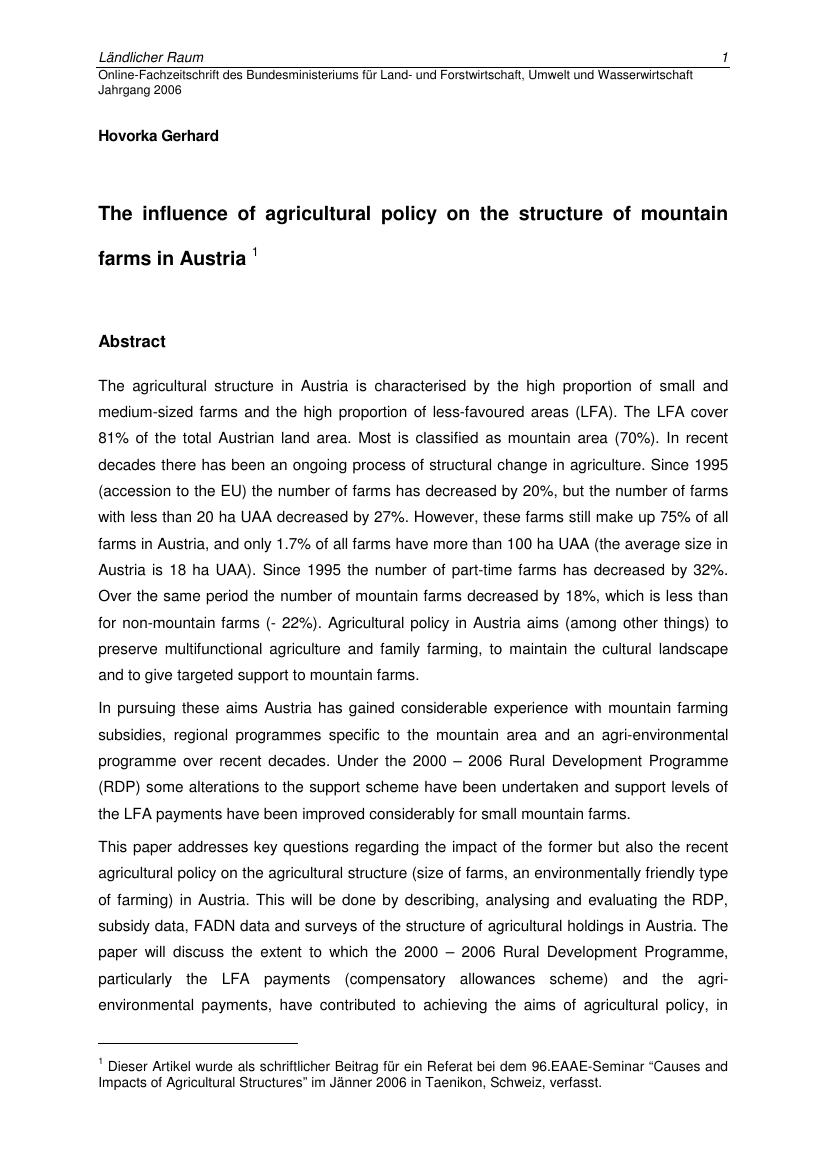 The agricultural structure in Austria is characterised by the high proportion of small and medium-sized farms and the high proportion of less-favoured areas (LFA). The LFA cover 81% of the total Austrian land area. Most is classified as mountain area (70%). In recent decades there has been an ongoing process of structural change in agriculture. Since 1995 (accession to the EU) the number of farms has decreased by 20%, but the number of farms with less than 20 ha UAA decreased by 27%. However, these farms still make up 75% of all farms in Austria, and only 1.7% of all farms have more than 100 ha UAA (the average size in Austria is 18 ha UAA). Since 1995 the number of part-time farms has decreased by 32%. Over the same period the number of mountain farms decreased by 18%, which is less than for non-mountain farms (- 22%). Agricultural policy in Austria aims (among other things) to preserve multifunctional agriculture and family farming, to maintain the cultural landscape and to give targeted support to mountain farms. In pursuing these aims Austria has gained considerable experience with mountain farming subsidies, regional programmes specific to the mountain area and an agri-environmental programme over recent decades. Under the 2000 - 2006 Rural Development Programme (RDP) some alterations to the support scheme have been undertaken and support levels of the LFA payments have been improved considerably for small mountain farms. This paper addresses key questions regarding the impact of the former but also the recent agricultural policy on the agricultural structure (size of farms, an environmentally friendly type of farming) in Austria. This will be done by describing, analysing and evaluating the RDP, subsidy data, FADN data and surveys of the structure of agricultural holdings in Austria. The paper will discuss the extent to which the 2000 - 2006 Rural Development Programme, particularly the LFA payments (compensatory allowances scheme) and the agri-environmental payments, have contributed to achieving the aims of agricultural policy, in particular to maintaining the agricultural structure of family farming in mountain areas and an environmentally friendly type of farming. The limits on policy in its ability to influence the ongoing structural changes will also be discussed.