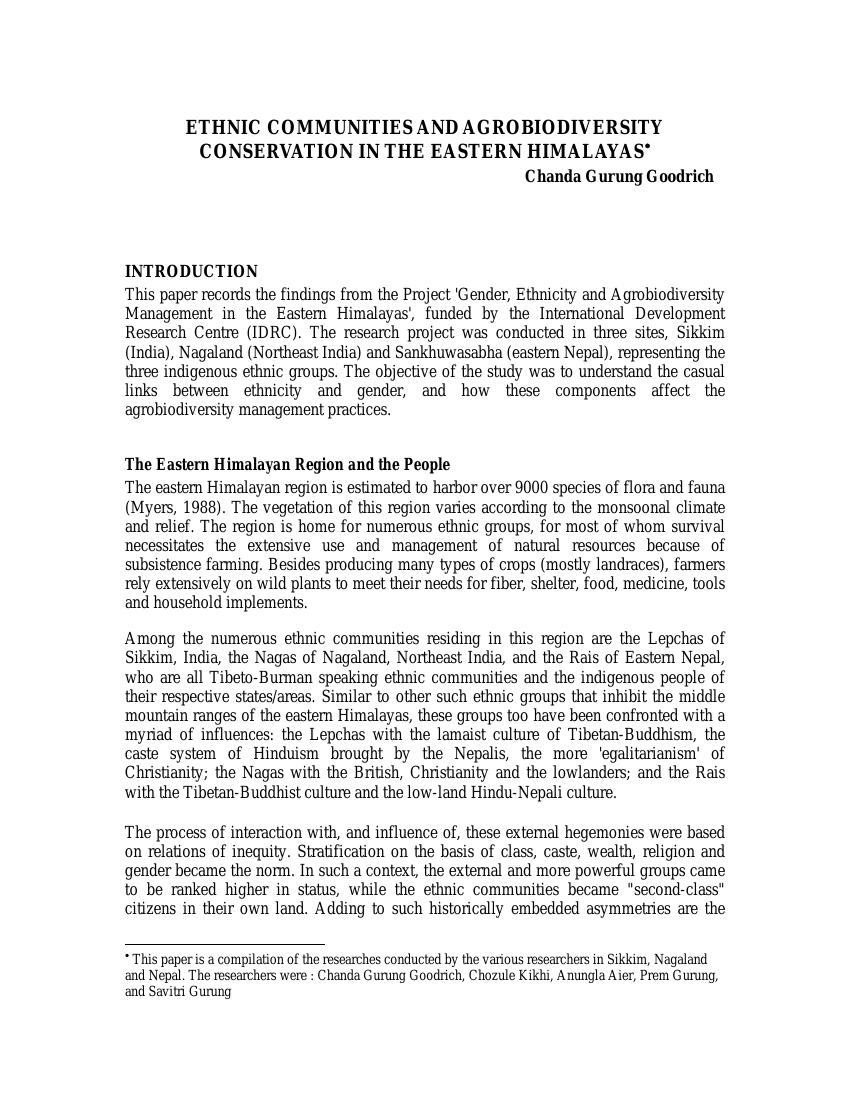 Ethnic communities and agrobiodiversity conservation in the eastern Himalayas

This paper records the findings from the Project 'Gender, Ethnicity and Agrobiodiversity Management in the Eastern Himalayas', funded by the International Development Research Centre (IDRC). The research project was conducted in three sites, Sikkim (India), Nagaland (Northeast India) and Sankhuwasabha (eastern Nepal), representing the three indigenous ethnic groups. The objective of the study was to understand the casual links between ethnicity and gender, and how these components affect the agrobiodiversity management practices. Among the numerous ethnic communities in this region are the Lepchas of Sikkim, India, the Nagas of Nagaland, Northeast India, and the Rais of Eastern Nepal, who are all Tibeto-Burman speaking and indigenous people of their respective states/areas. Similar to other such ethnic groups that inhibit the middle mountain ranges of the eastern Himalayas, these groups too have been confronted with a myriad of influences: the Lepchas with the lamaist culture of Tibetan-Buddhism, the caste system of Hinduism brought by the Nepalis, the more 'egalitarianism' of Christianity; the Nagas with the British, Christianity and the lowlanders; and the Rais with the Tibetan-Buddhist culture and the low-land Hindu-Nepali culture. Interaction with and influence of these external influences were based on relations of inequity. Stratification on the basis of class, caste, wealth, religion and gender became the norm. The external and more powerful groups came to be ranked higher in status, while the ethnic communities became "second-class" citizens in their own land. In addition to historically embedded asymmetries are the present center/periphery relations and lowland/highland interactions which have led to changes in their socio-cultural values and systems as well as in subsistence practices. Hindu gender ideologies and practices have had strong impact on the ways that gendered spaces and gender relations came to be conceptualized in the culture and practice of the ethnic groups. Traditional gendered spaces in the livelihood systems of ethnic groups have transformed as settled agricultural practices have replaced traditional subsistence systems of hunting-gathering and slash and burn cultivation. Traditionally, cultivation was considered "women's domain" and hunting "men's domain". This gender division of labor and "spaces" was based on the belief that women were the symbols of fertility and "caretakers and nurturers", and men the "active providers". In this system of division of domains the women and men were in complete control over their respective "spaces". With the transformation in subsistence systems - including not only new technologies and crops but also new beliefs and value systems attached to these activities and to the external communities that brought the new livelihood practices - traditional gendered spaces in the livelihood systems also changed: agricultural space gradually came under the control and domain of men. Women lost their control over this sphere of activity and came to be considered merely as "helpers" even if their workload in this sphere of activity in no way decreased.
962 Views
252 Downloads