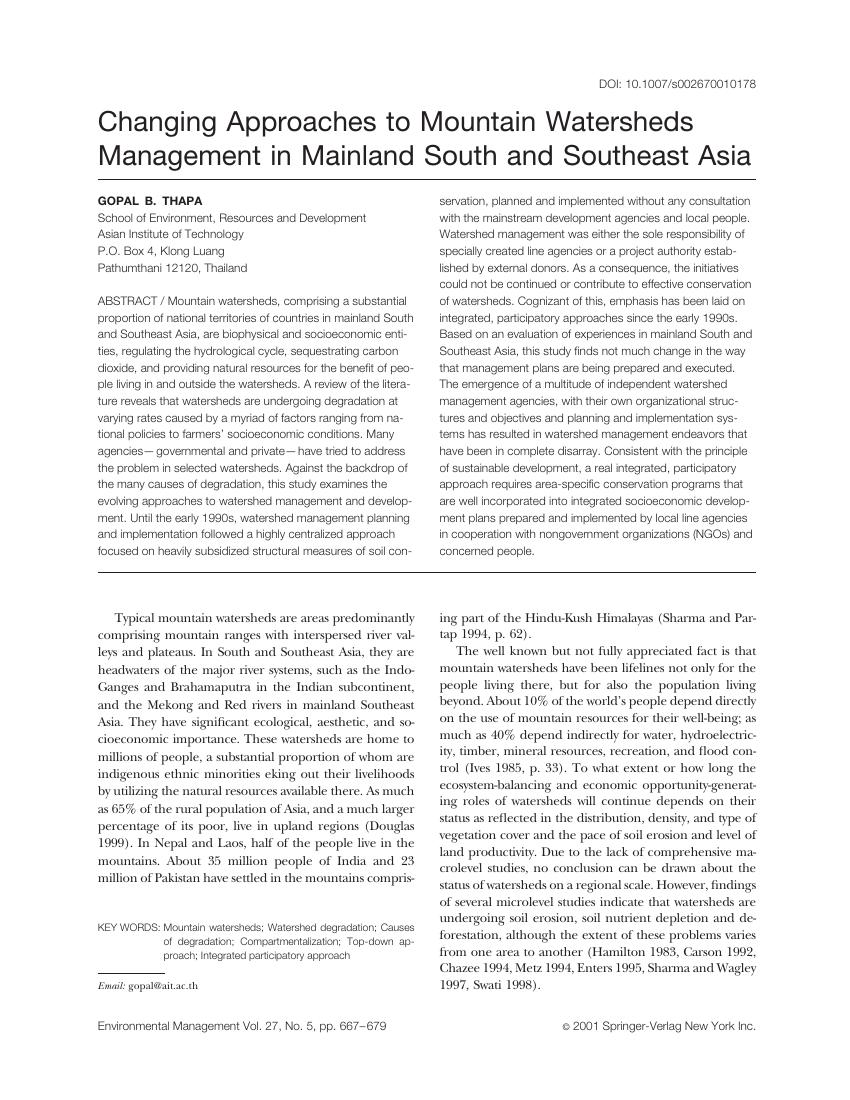 Mountain watersheds, comprising a substantial proportion of national territories of countries in mainland South and Southeast Asia, are biophysical and socioeconomic entities, regulating the hydrological cycle, sequestrating carbon dioxide, and providing natural resources for the benefit of people living in and outside the watersheds. A review of the literature reveals that watersheds are undergoing degradation at varying rates caused by a myriad of factors ranging from national policies to farmers? socioeconomic conditions. Many agencies ? governmental and private ? have tried to address the problem in selected watersheds. Against the backdrop of the many causes of degradation, this study examines the evolving approaches to watershed management and development. Until the early 1990s, watershed management planning and implementation followed a highly centralized approach focused on heavily subsidized structural measures of soil conservation, planned and implemented without any consultation with the mainstream development agencies and local people. Watershed management was either the sole responsibility of specially created line agencies or a project authority established by external donors. As a consequence, the initiatives could not be continued or contribute to effective conservation of watersheds. Cognizant of this, emphasis has been laid on integrated, participatory approaches since the early 1990s. Based on an evaluation of experiences in mainland South and Southeast Asia, this study finds not much change in the way that management plans are being prepared and executed. The emergence of a multitude of independent watershed management agencies, with their own organizational structures and objectives and planning and implementation systems has resulted in watershed management endeavors that have been in complete disarray. Consistent with the principle of sustainable development, a real integrated, participatory approach requires area-specific conservation programs that are well incorporated into integrated socioeconomic development plans prepared and implemented by local line agencies in cooperation with nongovernment organizations (NGOs) and concerned people.