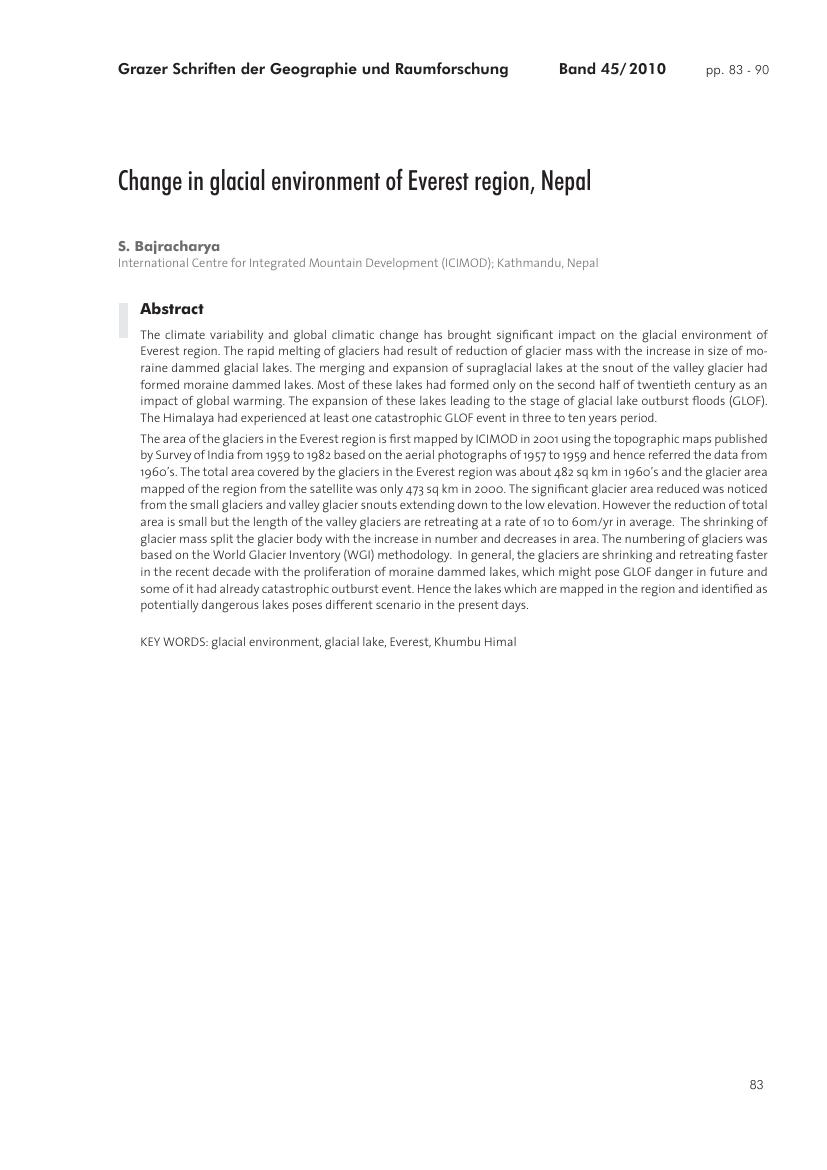 The climate variability and global climatic change has brought significant impact on the glacial environment of Everest region. The rapid melting of glaciers had result of reduction of glacier mass with the increase in size of mo-raine dammed glacial lakes. The merging and expansion of supraglacial lakes at the snout of the valley glacier had formed moraine dammed lakes. Most of these lakes had formed only on the second half of twentieth century as an impact of global warming. The expansion of these lakes leading to the stage of glacial lake outburst floods (GLOF). The Himalaya had experienced at least one catastrophic GLOF event in three to ten years period. The area of the glaciers in the Everest region is first mapped by ICIMOD in 2001 using the topographic maps published by Survey of India from 1959 to 1982 based on the aerial photographs of 1957 to 1959 and hence referred the data from 1960’s. The total area covered by the glaciers in the Everest region was about 482 sq km in 1960’s and the glacier area mapped of the region from the satellite was only 473 sq km in 2000. The significant glacier area reduced was noticed from the small glaciers and valley glacier snouts extending down to the low elevation. However the reduction of total area is small but the length of the valley glaciers are retreating at a rate of 10 to 60m/yr in average. The shrinking of glacier mass split the glacier body with the increase in number and decreases in area. The numbering of glaciers was based on the World Glacier Inventory (WGI) methodology. In general, the glaciers are shrinking and retreating faster in the recent decade with the proliferation of moraine dammed lakes, which might pose GLOF danger in future and some of it had already catastrophic outburst event. Hence the lakes which are mapped in the region and identified as potentially dangerous lakes poses different scenario in the present days.