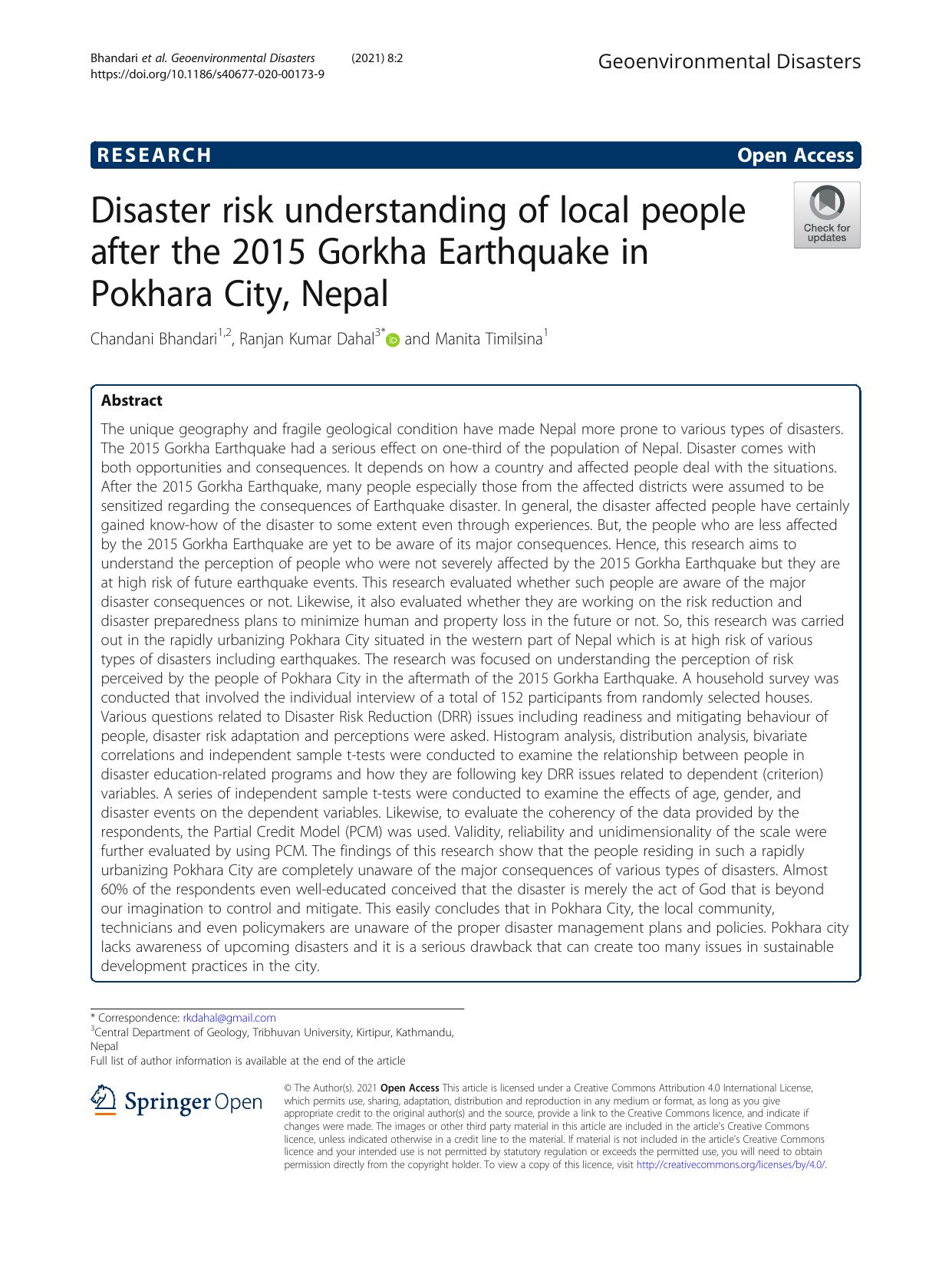 The unique geography and fragile geological condition have made Nepal more prone to various types of disasters. The 2015 Gorkha Earthquake had a serious effect on one-third of the population of Nepal. Disaster comes with both opportunities and consequences. It depends on how a country and affected people deal with the situations. After the 2015 Gorkha Earthquake, many people especially those from the affected districts were assumed to be sensitized regarding the consequences of Earthquake disaster. In general, the disaster affected people have certainly gained know-how of the disaster to some extent even through experiences. But, the people who are less affected by the 2015 Gorkha Earthquake are yet to be aware of its major consequences. Hence, this research aims to understand the perception of people who were not severely affected by the 2015 Gorkha Earthquake but they are at high risk of future earthquake events. This research evaluated whether such people are aware of the major disaster consequences or not. Likewise, it also evaluated whether they are working on the risk reduction and disaster preparedness plans to minimize human and property loss in the future or not. So, this research was carried out in the rapidly urbanizing Pokhara City situated in the western part of Nepal which is at high risk of various types of disasters including earthquakes. The research was focused on understanding the perception of risk perceived by the people of Pokhara City in the aftermath of the 2015 Gorkha Earthquake. A household survey was conducted that involved the individual interview of a total of 152 participants from randomly selected houses. Various questions related to Disaster Risk Reduction (DRR) issues including readiness and mitigating behaviour of people, disaster risk adaptation and perceptions were asked. Histogram analysis, distribution analysis, bivariate correlations and independent sample t-tests were conducted to examine the relationship between people in disaster education-related programs and how they are following key DRR issues related to dependent (criterion) variables. A series of independent sample t-tests were conducted to examine the effects of age, gender, and disaster events on the dependent variables. Likewise, to evaluate the coherency of the data provided by the respondents, the Partial Credit Model (PCM) was used. Validity, reliability and unidimensionality of the scale were further evaluated by using PCM. The findings of this research show that the people residing in such a rapidly urbanizing Pokhara City are completely unaware of the major consequences of various types of disasters. Almost 60% of the respondents even well-educated conceived that the disaster is merely the act of God that is beyond our imagination to control and mitigate. This easily concludes that in Pokhara City, the local community, technicians and even policymakers are unaware of the proper disaster management plans and policies. Pokhara city lacks awareness of upcoming disasters and it is a serious drawback that can create too many issues in sustainable development practices in the city. © 2021, The Author(s).