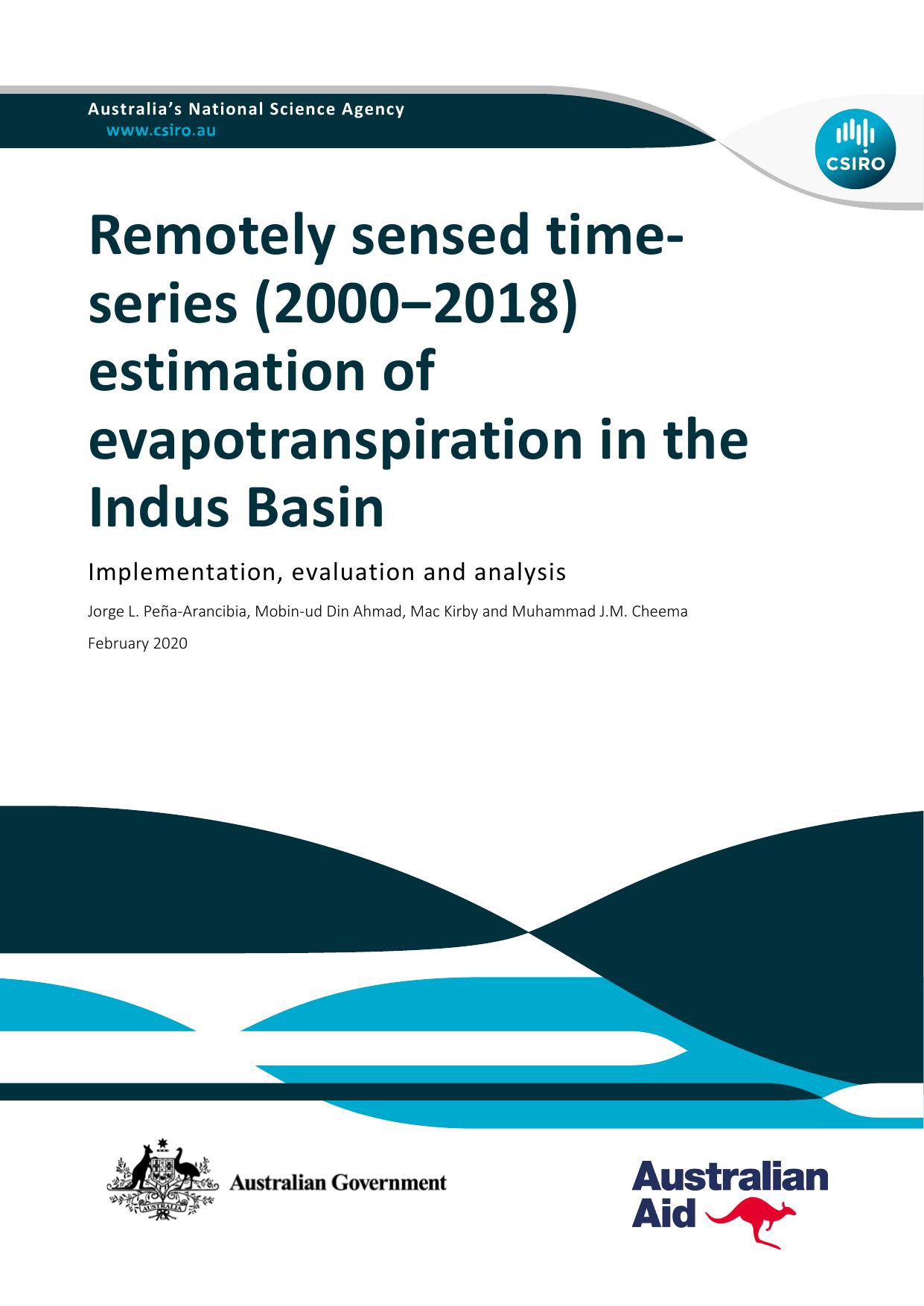 Evapotranspiration is the largest water balance component in semi-arid irrigated systems. The Indus Basin Irrigation System (IBIS, ~140,000 km2) is the largest irrigated system in the world. Remote sensing can provide consistent and robust spatial estimates of evapotranspiration at spatiotemporal scales (<1000 m and monthly) that can be used to estimate the water balance and the performance of irrigated systems at the canal command scale. This study evaluated the skill of the CMRSET (CSIRO MODIS ReScaled EvapoTranspiration) algorithm to estimate actual evapotranspiration (ETa) in the 56 canal command areas of the IBIS in Pakistan over the period 2000 to 2018 at 10-day temporal and 500 m spatial resolution. This algorithm was selected as it only requires multi-temporal remote sensing imagery to derive a crop factor and meteorological data for its implementation. To implementation was facilitated by pre-processing satellite reflectance data using the geospatial analysis tool and remote sensing data repository Google Earth Engine. Unlike previous studies of limited duration or spatial domain, these time-series provide the first long-term (>15 years) consistent ETa time-series for the entire IBIS at spatial and temporal resolutions that are useful to assess irrigation systems at the canal command scale. To assess CMRSET’s accuracy and therefore its usefulness for water balance modelling and other applications, its estimates were evaluated against existing estimates from two remotely sensed ETa products, SEBAL and ETLook at the pixel and canal command scale, and against ground ETa measurements at the pixel scale – to assess its accuracy. SEBAL and ETLook were implemented for the year October 2004 to September 2005 and for the calendar year 2007, respectively, and had a comparable spatial and temporal resolution as CMRSET. SEBAL was implemented in the northern part (covering mainly Punjab canal commands) of the study region, and ETLook for the whole Indus Basin (which includes the entire IBIS), therefore the assessment was conducted in 40 canal commands for SEBAL, and 56 canals commands for ETLook. Generally, CMRSET compared well against both datasets, both in terms of magnitude and temporal patterns. CMRSET agreed better to SEBAL in terms of magnitude, with a mean Pearson’s correlation coefficient r of 0.85 (min of 0.54 and max of 0.97), a mean absolute percentage bias of 7.6% (min of -12.5% and max of 27.8%), and a mean RMSD of 18.0 mm/mo (min of 9.4 mm/mo and max of 26.7 mm/mo), and no canal command had a bias greater than ±30%. For ETLook, the mean Pearson’s correlation coefficient r was 0.93 (min of 0.68 and max of 1.00), the mean absolute percentage bias was 21.4% (min of -23% and max of 77%), and the mean RMSD was 20.5 mm/mo (min of 7.3 mm/mo and max of 49.8 mm/mo). Whilst the temporal patterns were well captured, the resulting magnitudes seemed to be mixed, with 14 canal commands having a percentage bias larger than +30%. CMRSET ETa estimates were also assessed against two in situ Bowen ratio surface energy balance ETa measurements, that were set up from July 2000 to March 2001 (9 months, during the growing season) in two locations in the Punjab Province. In these locations, CMRSET was also implemented using Landsat (30 m) bands and the same CMRSET model parameters to assess scale differences related to pixel smearing and averaging in the coarser MODIS data (500 m). MODIS CMRSET showed reasonable agreement both in magnitude and seasonality considering the scale differences. For both locations, the Pearson’s correlation coefficient r was greater than 0.92, the percentage bias less than 20% and the RMSD less than 17 mm/mo. Results were markedly better for Landsat CMRSET estimates at both locations with bias in both cases being lower than 5%, although with some seasonal compensation reducing bias and RMSD errors. Considering the differences between CMRSET and the existing remotely sensed products, particular care is required in the use of ETa for a quantitative water assessment or water balance analyses that uses absolute values, such as the assessment of sustainable groundwater use. Ideally, the results of related applications should be cross-checked for the presence of biases or inconsistencies in relation to the use of this or any other remotely sensed ETa products. This report is companion to a report that assesses future scenarios impact on irrigated agriculture using the remotely sensed ETa products for scenario exploration in a way that the differences do not exert an undue influence in the interpretation of results. Monthly CMRSET ETa estimates were used to assess how ETa changed spatially and temporally in the lower IBIS canal commands during the 2000‒2018 period. Temporal resolution was annual (April–March water year) and seasonal – wet Kharif (April to September) and dry Rabi (October to March). The assessment showed that ETa in most irrigated areas within the canal commands exceeded 600 mm/y, with some areas that exceeded 1000 mm/y, particularly in rice canal commands in the Sindh Rice Wheat agro-climatic zone. Lower mean annual and Kharif ETa occurred in the Sindh Cotton Wheat South agro-climatic zone and Sindh Rice Wheat South agro-climatic zone canal commands, with around 400 mm to 500 mm (about 100 to 200 mm less) during Kharif. On the other hand, during Rabi, most irrigated areas exceeded 300 mm. The pre-processing capabilities of Google Earth Engine and continuous update of its satellite imagery catalogue, plus the straightforward implementation of CMRSET ETa, potentially on a continuous basis, provides an opportunity for monitoring irrigation dynamics and the assessment of structural and policy improvements in the IBIS.
302 Views
2 Downloads