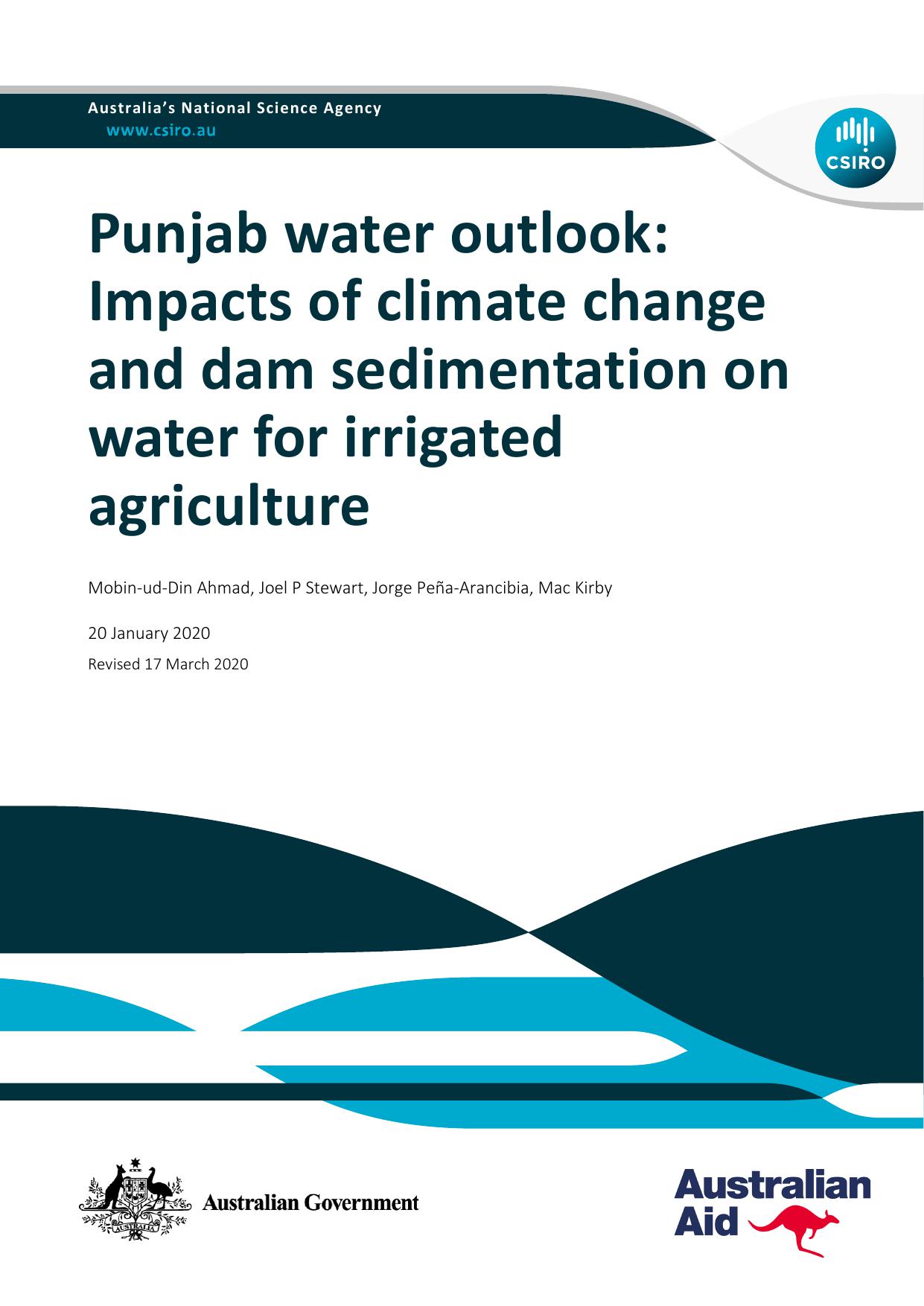 This report used measured estimates of rainfall, actual evapotranspiration, canal deliveries and change in groundwater levels to assess the water balance of the canal commands in Punjab. The canal deliveries are the main supply of water into the canal commands. The use of groundwater is important, with a large volume of groundwater pumped for irrigation, though the net groundwater use (the difference between use and recharge) is a small component of the overall water balance, as evidenced by the change in groundwater levels. However, the sum of the measured water balance terms left a large residual of error or unknown water. There is also uncertainty in the assessment of evapotranspiration, and we used two remote sensing methods for assessing it. We then assessed the change to the water balance from the historical baseline of projected (modelled) future rainfall, actual evapotranspiration, and canal deliveries under the 1991 inter-provincial water accord as affected by climate change in the Upper Indus and in Punjab province, and as affected by sedimentation in the main irrigation supply dams. We also assessed a ‘no-dams’ scenario in which it was assumed that there was no water storage in dams. These changes were captured as a set of 10 exploratory future scenarios. The study employed a simple approximate method for calculating the change in the area of crops required to use the available water. The exploratory scenario analysis shows that the influence of changes to the local climate generally had the largest impact on the water balance, followed by the impact of flows on canal deliveries, then the no-dams scenario, and then the sedimentation scenarios. While this is the general picture, in some seasons the order of some effects is reversed. The analysis also showed that while the actual evapotranspiration estimated by two methods (ETLook and CMRSET) differed, the changes to the water balance were almost the same for the two methods. Therefore, the choice of method of actual evapotranspiration estimation made almost no difference to the assessment of impacts under the exploratory future scenarios. We conclude that water availability in Punjab may increase or decrease due to climate change in the Upper Indus Basin and due to local climate change in Punjab. Sedimentation in the Tarbela and Mangla storages up to 2050 is projected to have a negative impact in the Rabi season particularly in conjunction with climate change. Complete loss of dam storage, such as might occur over the very long term, is projected to lead to much reduced water availability in the Rabi season, since there is a lesser volume of storage to supply Rabi crop demands, and increased availability in Kharif since there is a lesser volume of storage to capture the large Kharif river flows. In the Kharif season, the potential increases are generally larger than the potential decreases. Conversely, in the Rabi season, the potential increases are generally smaller than the potential decreases. The Punjab could choose to accommodate changes in water availability and demand by adjusting the volume of groundwater use in fresh groundwater quality areas, though this is likely not to be sustainable in the long run. Alternatively, the current level of groundwater use could be maintained, and the area of crops adjusted. If the latter course is followed, the potential reductions in crop area in the Rabi in response to lesser water availability are projected for some crops to amount to an area equivalent to about 3 000 000 ha in several scenarios. The extreme case of loss of dam storage altogether (without the added impact of other scenarios) could amount to a loss of Rabi water availability equivalent to more than the area of the wheat crop. Several strategies will help deal with the impacts, including changing the areas of crops, changing the mix of crops to lower water using crops, improving the efficiency of water delivery via the canals, and improving crop productivity. Although it does not seem to offer a short to medium term benefit, in the very long term controlling sedimentation in dams could also be beneficial.
283 Views
1 Downloads