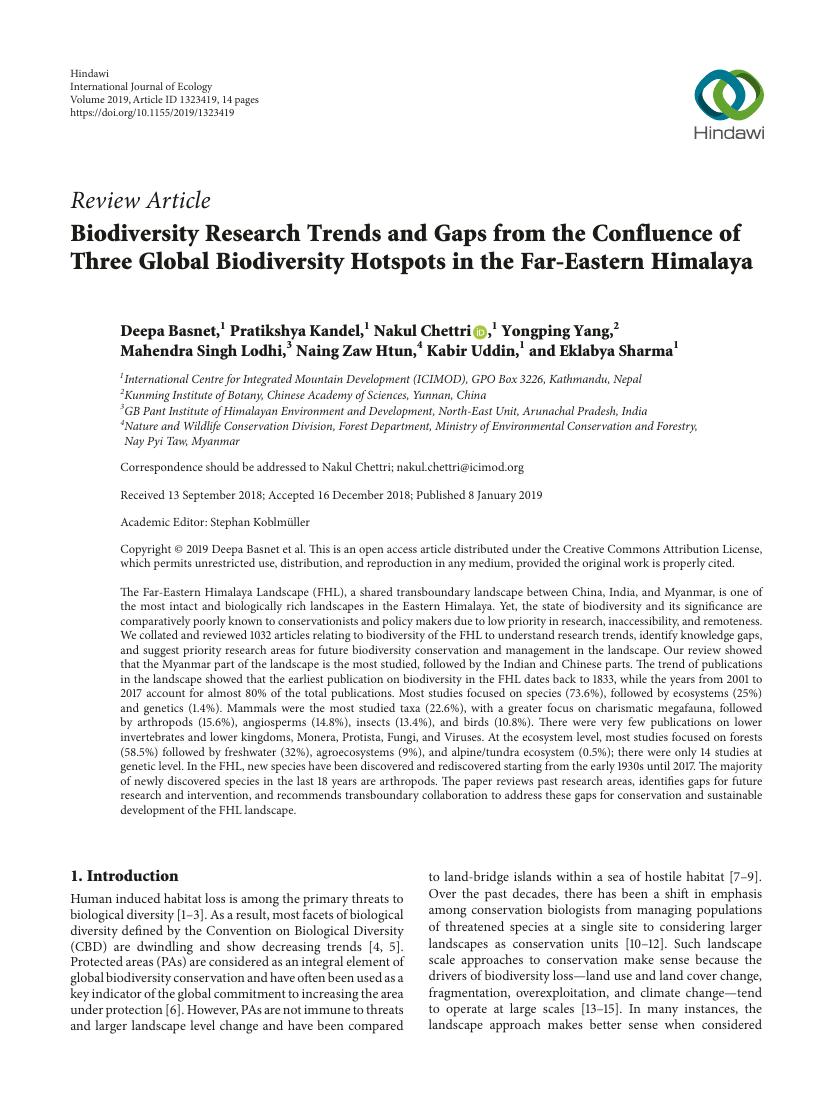 The Far-Eastern Himalaya Landscape (FHL), a shared transboundary landscape between China, India, and Myanmar, is one of the most intact and biologically rich landscapes in the Eastern Himalaya. Yet, the state of biodiversity and its significance are comparatively poorly known to conservationists and policy makers due to low priority in research, inaccessibility, and remoteness. We collated and reviewed 1032 articles relating to biodiversity of the FHL to understand research trends, identify knowledge gaps, and suggest priority research areas for future biodiversity conservation and management in the landscape. Our review showed that the Myanmar part of the landscape is the most studied, followed by the Indian and Chinese parts. The trend of publications in the landscape showed that the earliest publication on biodiversity in the FHL dates back to 1833, while the years from 2001 to 2017 account for almost 80% of the total publications. Most studies focused on species (73.6%), followed by ecosystems (25%) and genetics (1.4%). Mammals were the most studied taxa (22.6%), with a greater focus on charismatic megafauna, followed by arthropods (15.6%), angiosperms (14.8%), insects (13.4%), and birds (10.8%). There were very few publications on lower invertebrates and lower kingdoms, Monera, Protista, Fungi, and Viruses. At the ecosystem level, most studies focused on forests (58.5%) followed by freshwater (32%), agroecosystems (9%), and alpine/tundra ecosystem (0.5%); there were only 14 studies at genetic level. In the FHL, new species have been discovered and rediscovered starting from the early 1930s until 2017. The majority of newly discovered species in the last 18 years are arthropods. The paper reviews past research areas, identifies gaps for future research and intervention, and recommends transboundary collaboration to address these gaps for conservation and sustainable development of the FHL landscape.