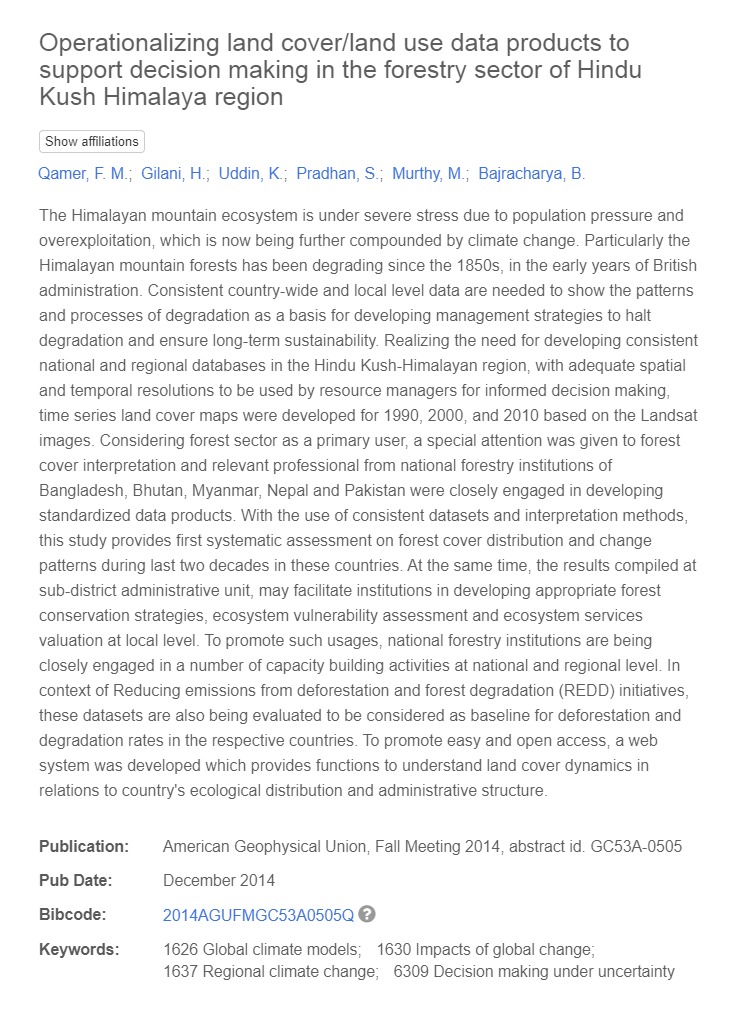 The Himalayan mountain ecosystem is under severe stress due to population pressure and overexploitation, which is now being further compounded by climate change. Particularly the Himalayan mountain forests has been degrading since the 1850s, in the early years of British administration. Consistent country-wide and local level data are needed to show the patterns and processes of degradation as a basis for developing management strategies to halt degradation and ensure long-term sustainability. Realizing the need for developing consistent national and regional databases in the Hindu Kush-Himalayan region, with adequate spatial and temporal resolutions to be used by resource managers for informed decision making, time series land cover maps were developed for 1990, 2000, and 2010 based on the Landsat images. Considering forest sector as a primary user, a special attention was given to forest cover interpretation and relevant professional from national forestry institutions of Bangladesh, Bhutan, Myanmar, Nepal and Pakistan were closely engaged in developing standardized data products. With the use of consistent datasets and interpretation methods, this study provides first systematic assessment on forest cover distribution and change patterns during last two decades in these countries. At the same time, the results compiled at sub-district administrative unit, may facilitate institutions in developing appropriate forest conservation strategies, ecosystem vulnerability assessment and ecosystem services valuation at local level. To promote such usages, national forestry institutions are being closely engaged in a number of capacity building activities at national and regional level. In context of Reducing emissions from deforestation and forest degradation (REDD) initiatives, these datasets are also being evaluated to be considered as baseline for deforestation and degradation rates in the respective countries. To promote easy and open access, a web system was developed which provides functions to understand land cover dynamics in relations to country's ecological distribution and administrative structure.