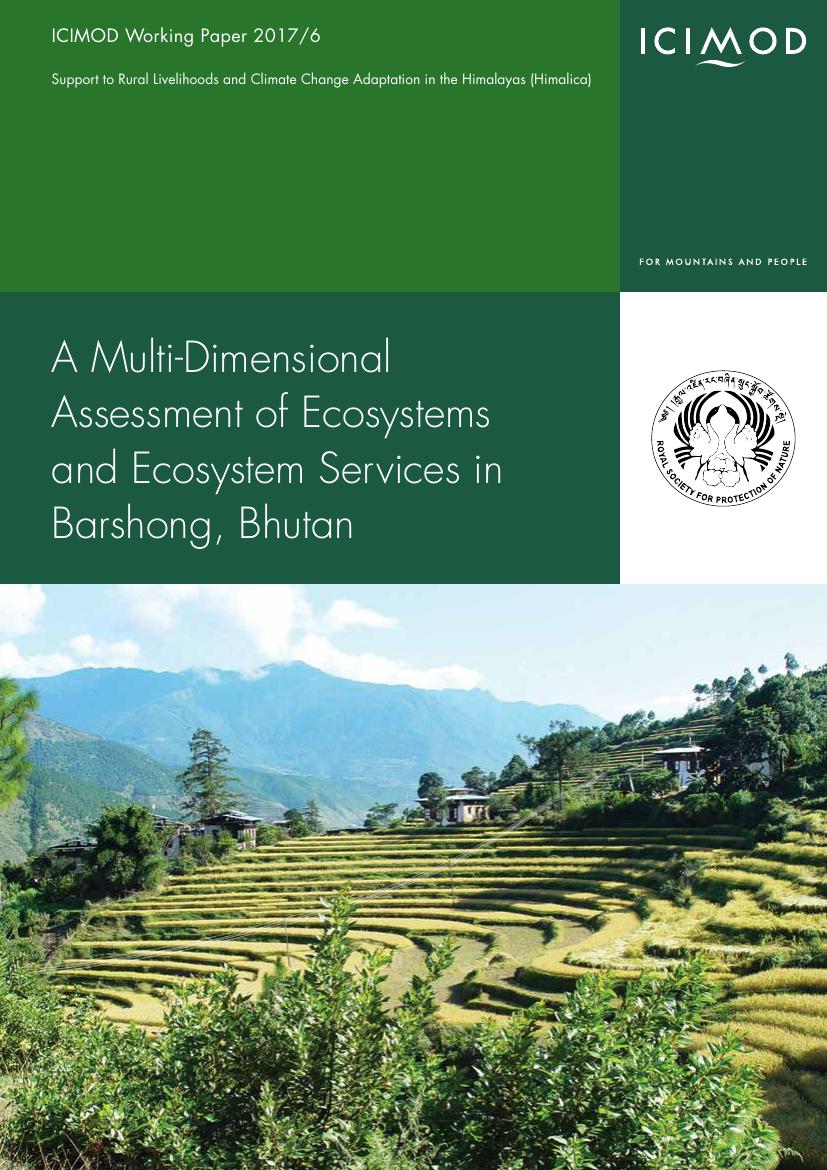 Occupying nearly 24% of the world’s land surface, mountains are home to 12% of the global population and provide a wide range of goods and services to one-fifth of humanity. The goods and services provided include water, hydroelectricity, timber, medicine, a wide variety of bio-resources, and opportunities for recreation and spiritual renewal. The Hindu Kush Himalaya (HKH) is one of the largest and most assorted mountain settings in the world, covering 4.3 million square kilometers, stretching from Afghanistan in the west to Myanmar in the east. The region is well known for its geohydrological, biological, cultural, and aesthetic value. The services provided by mountains contribute enormously to the region’s economic growth and are key to sustaining the livelihoods of the more than 200 million people living in the mountains and the approximately 1.3 billion people in the downstream river basins, as well as benefiting the global community.

Nestled within the HKH, Bhutan’s geographical diversity, combined with its equally diverse climatic conditions, make it a rich repository of biological diversity and ecosystems. Its various forests types and freshwater ecosystems are estimated to be the biggest contributor of ecosystem goods and services in Bhutan, contributing to the wellbeing of the Bhutanese people. More than 69% of the population are subsistence farmers who are dependent on forests, water bodies, and croplands for agriculture and livestock. At the macroeconomic level, Bhutan’s development agenda relies heavily on hydropower and tourism, which are, in turn, highly dependent on natural resources and ecosystem services. An ecosystem valuation carried out by Kubiszewski et al. (2013) estimated that a total of USD 4,944 million worth of benefits are derived from the ecosystem services provided by forests, rangelands, wetlands, and the inland waters of Bhutan.

However, Bhutan’s mountain ecosystem, like the rest of the Himalayan region, is fragile due to its topographic, biological, and physical features. Its dynamics and stability are influenced by its development status as an emergent economy, as well as other anthropogenic factors, including climate change. Hence, the development of policies and strategies to address the complexities of ecosystem management and enhance its services for human wellbeing is imperative.

In this context, with support from the European Union, under the aegis of the Support to Rural Livelihoods and Climate Change Adaptation in the Himalayas (Himalica) initiative, the Royal Society for Protection of Nature (RSPN), with financial and technical support from the International Centre for Integrated Mountain Development (ICIMOD), carried out this study to develop a comprehensive understanding of the state and dynamics of ecosystems and their services in Barshong Gewog in Tsirang, Bhutan and their nexus with human wellbeing.

This report draws on both primary and secondary information. A participatory rural appraisal (PRA) and household questionnaire survey were carried out to assess the state and dynamics of ecosystems in Barshong Gewog and their capacity to provide goods and services, as well as community vulnerability to various drivers of change and their coping strategies in response to perceived changes. In addition, the geospatial analysis was used to map the land use and land cover change in relation to the spatial and temporal changes in ecosystems and ecosystem services in the study area.