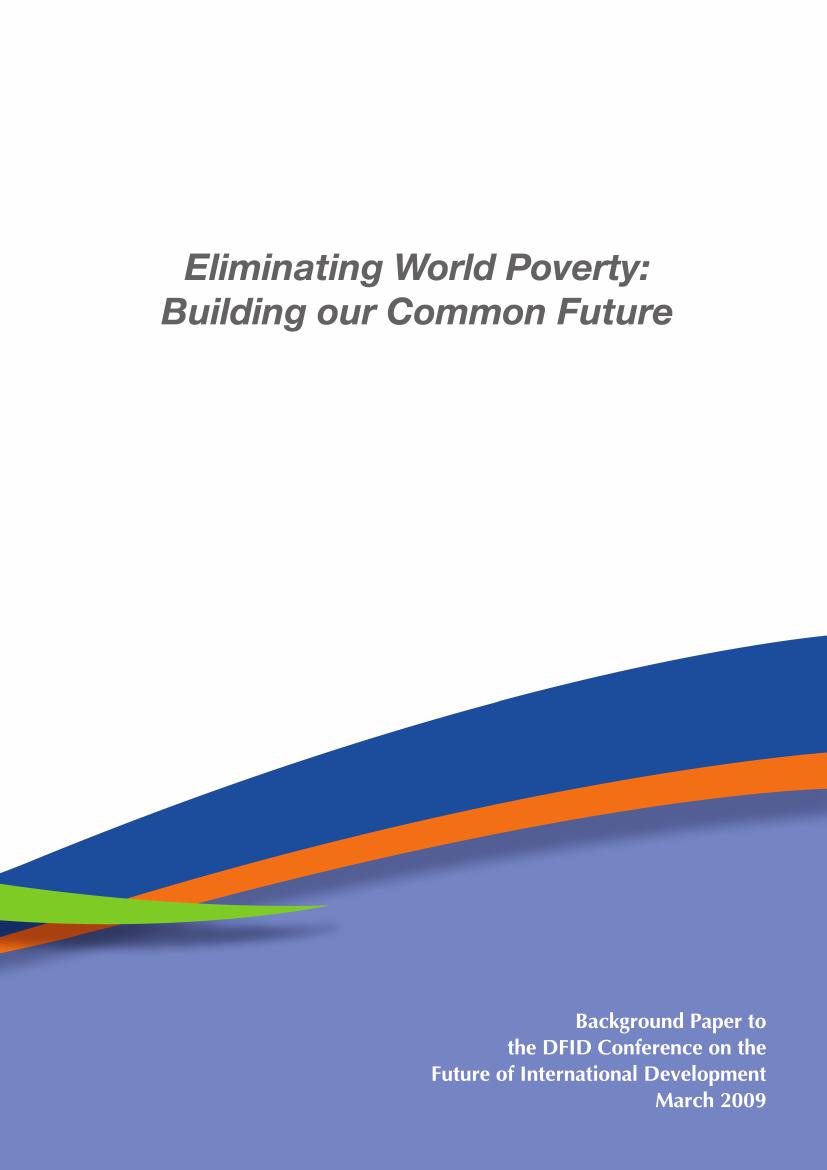 These are difficult and uncertain times. Difficult, because the current global recession seriously threatens the achievement of the Millennium Development Goals, and may push more than 90 million people into poverty. Uncertain, because the scale of the downturn is not yet known, and the impact could be even more serious. Combined with other huge challenges already happening, or on the horizon, including the demands of a growing population and the onset of climate change, this is an important moment to reaffirm our commitment to international development and to review priorities.

The past year has witnessed a series of unprecedented events. For most of 2008 discussion focused on rises in the prices of food and oil. There were winners and losers from both price spikes, but it was clear that many poor people were seriously affected. In September 2008 a credit crunch turned into a full-blown financial crisis and this has now turned into a global recession. This crisis is evolving and our knowledge about its full effects remains incomplete, but the signs in early 2009 are of a deep and prolonged downturn, with a profound impact on people’s lives.

Other important trends are emerging. There is an increasing concentration of extreme poverty in fragile and conflict-affected countries, or regions. The most recent poverty projections put the number of people living in extreme poverty at 1.4 billion. Throughout the world, the effects of climate change are already being felt and are set to get much worse. The International Panel on Climate Change suggest that if we continue with ‘business as usual’, we are set for global temperature rises of up to 4 °C by the end of the century, with devastating consequences for the poor, as well as our global prosperity and security. It is also clear from discussion at the G20 and elsewhere, that tackling shared global challenges requires institutions fit for purpose: efficient, accountable and of sufficient scale and scope to deliver the global public goods that the world now needs.

There will be different views about the way forward. These will reflect interpretations about the causes and scale of the current crisis, different regional dynamics and the speed and scale of climate change. This conference will focus on a set of priority issues: the economic downturn; climate change; food security; fragile and conflict-affected countries; reform of the international system; and the MDG agenda. Some topics, like gender and inequality, cut across the five priorities. Each of these issues will have to be reframed in light of the current global challenges. The paper is organised into four parts. Part one briefly reviews recent progress in developing countries. Part two sets out the emerging challenges, both immediate and longer term. Part three sets out a series of questions for consideration in priority policy areas in response to the emerging challenges.