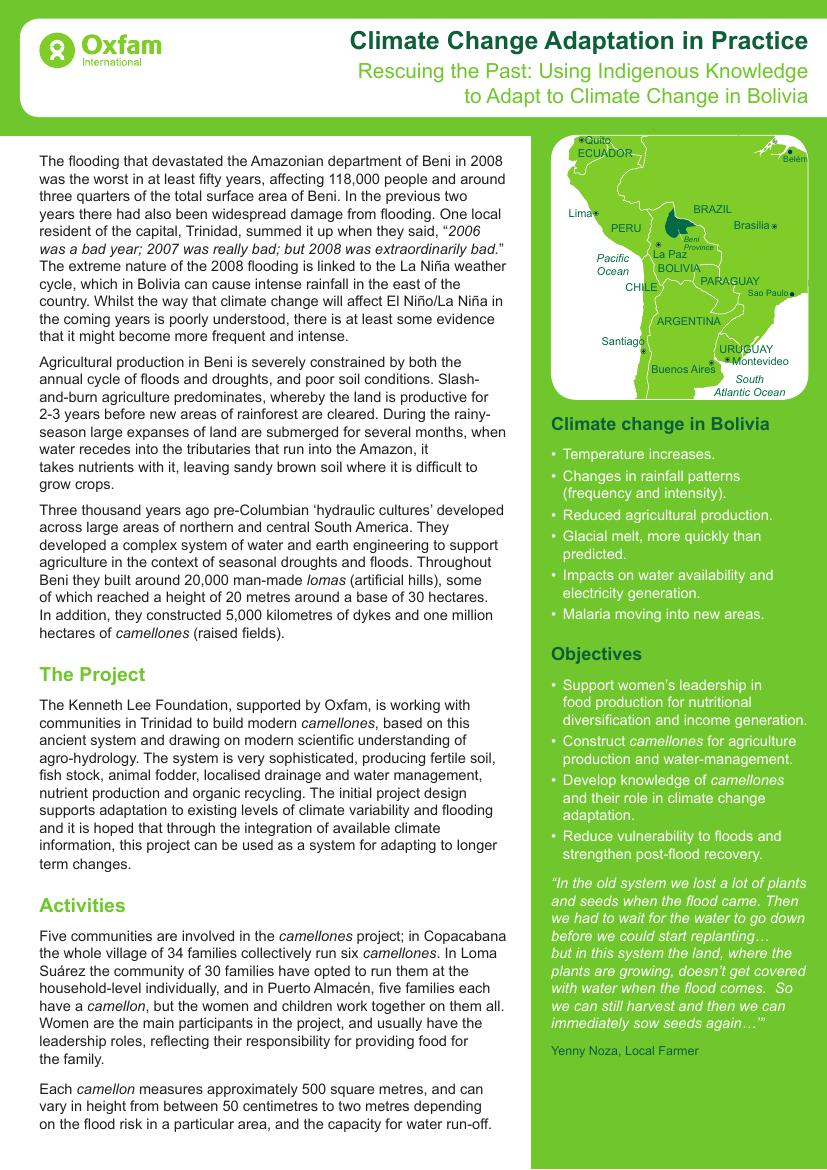 Climate change adaptation in practice. Rescuing the past: Using indigenous knowledge to adapt to climate change in Bolivia

The flooding that devastated the Amazonian department of Beni in 2008 was the worst in at least fifty years, affecting 118,000 people and around three quarters of the total surface area of Beni. In the previous two years there had also been widespread damage from flooding. One local resident of the capital, Trinidad, summed it up when they said, "2006 was a bad year; 2007 was really bad; but 2008 was extraordinarily bad." The extreme nature of the 2008 flooding is linked to the La Niña weather cycle, which in Bolivia can cause intense rainfall in the east of the country. Whilst the way that climate change will affect El Niño/La Niña in the coming years is poorly understood, there is at least some evidence that it might become more frequent and intense. Agricultural production in Beni is severely constrained by both the annual cycle of floods and droughts, and poor soil conditions. Slash-and-burn agriculture predominates, whereby the land is productive for 2-3 years before new areas of rainforest are cleared. During the rainy-season large expanses of land are submerged for several months, when water recedes into the tributaries that run into the Amazon, it takes nutrients with it, leaving sandy brown soil where it is difficult to grow crops. The Kenneth Lee Foundation, supported by Oxfam, is working with communities in Trinidad to build modern camellones, based on this ancient system and drawing on modern scientific understanding of agro-hydrology. The system is very sophisticated, producing fertile soil, fish stock, animal fodder, localised drainage and water management, nutrient production and organic recycling. The initial project design supports adaptation to existing levels of climate variability and flooding and it is hoped that through the integration of available climate information, this project can be used as a system for adapting to longer term changes.
1,328 Views
101 Downloads