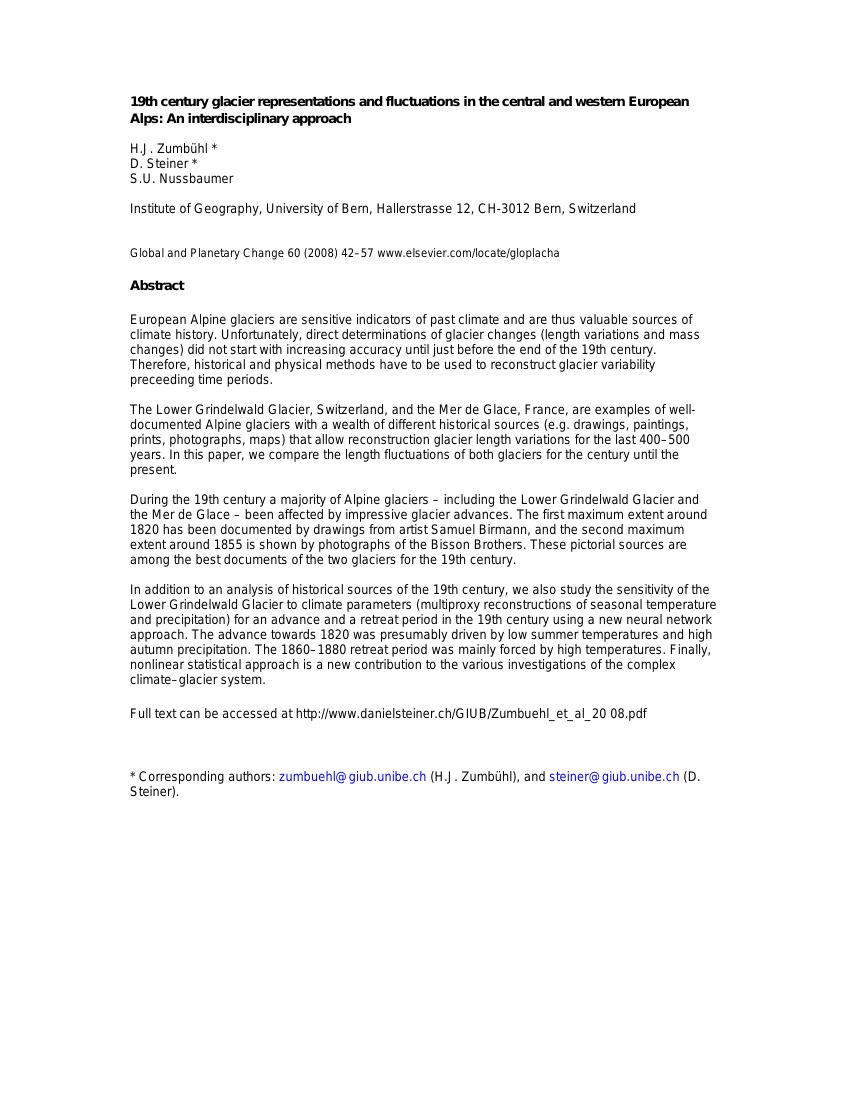 19th century glacier representations and fluctuations in the central and western European Alps: An interdisciplinary approach

European Alpine glaciers are sensitive indicators of past climate and are thus valuable sources of climate history. Unfortunately, direct determinations of glacier changes (length variations and mass changes) did not start with increasing accuracy until just before the end of the 19th century. Therefore, historical and physical methods have to be used to reconstruct glacier variability preceeding time periods. The Lower Grindelwald Glacier, Switzerland, and the Mer de Glace, France, are examples of well-documented Alpine glaciers with a wealth of different historical sources (e.g. drawings, paintings, prints, photographs, maps) that allow reconstruction glacier length variations for the last 400-500 years. In this paper, we compare the length fluctuations of both glaciers for the century until the present. During the 19th century a majority of Alpine glaciers - including the Lower Grindelwald Glacier and the Mer de Glace - been affected by impressive glacier advances. The first maximum extent around 1820 has been documented by drawings from artist Samuel Birmann, and the second maximum extent around 1855 is shown by photographs of the Bisson Brothers. These pictorial sources are among the best documents of the two glaciers for the 19th century. In addition to an analysis of historical sources of the 19th century, we also study the sensitivity of the Lower Grindelwald Glacier to climate parameters (multiproxy reconstructions of seasonal temperature and precipitation) for an advance and a retreat period in the 19th century using a new neural network approach. The advance towards 1820 was presumably driven by low summer temperatures and high autumn precipitation. The 1860-1880 retreat period was mainly forced by high temperatures. Finally, nonlinear statistical approach is a new contribution to the various investigations of the complex climate-glacier system. Full text accessed at http://www.danielsteiner.ch/GIUB/Zumbuehl_et_al_2008.pdf