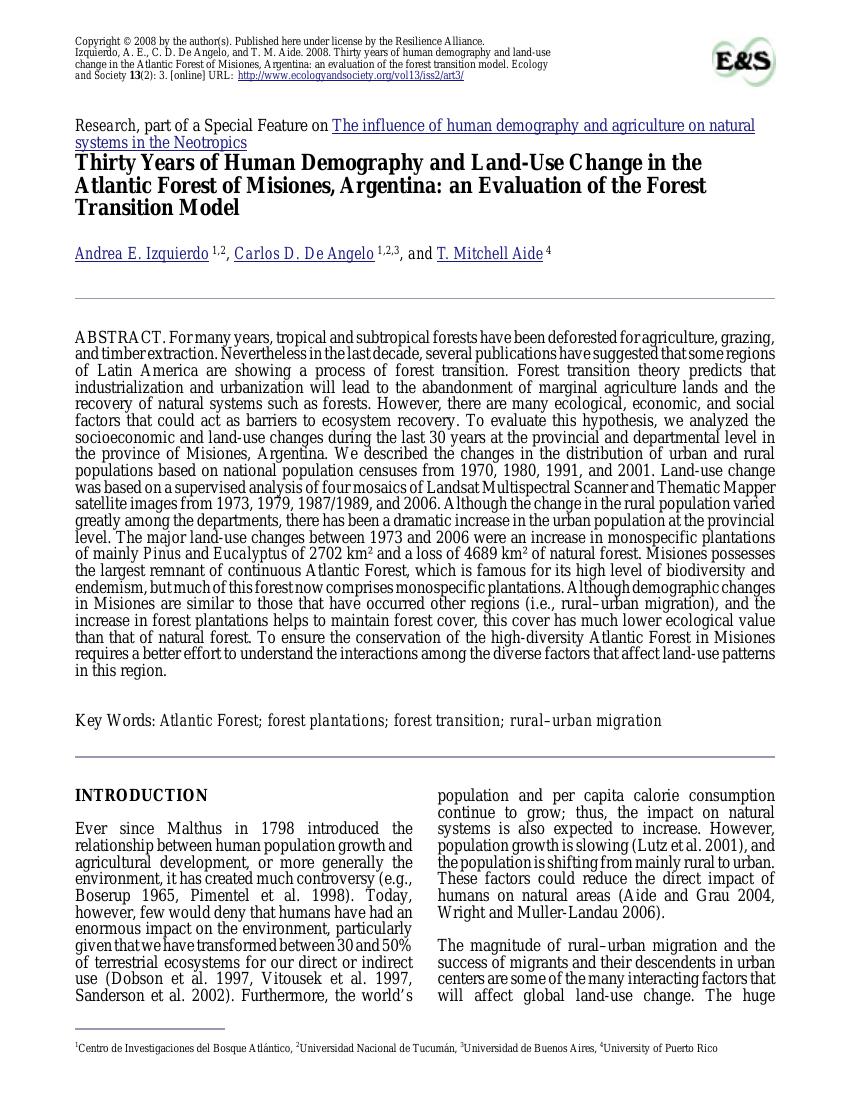 Thirty years of human demography and land-use change in the Atlantic Forest of Misiones, Argentina: An evaluation of the forest transition model

For many years, tropical and subtropical forests have been deforested for agriculture, grazing, and timber extraction. Nevertheless in the last decade, several publications have suggested that some regions of Latin America are showing a process of forest transition. Forest transition theory predicts that industrialization and urbanization will lead to the abandonment of marginal agriculture lands and the recovery of natural systems such as forests. However, there are many ecological, economic, and social factors that could act as barriers to ecosystem recovery. To evaluate this hypothesis, we analyzed the socioeconomic and land-use changes during the last 30 years at the provincial and departmental level in the province of Misiones, Argentina. We described the changes in the distribution of urban and rural populations based on national population censuses from 1970, 1980, 1991, and 2001. Land-use change was based on a supervised analysis of four mosaics of Landsat Multispectral Scanner and Thematic Mapper satellite images from 1973, 1979, 1987/1989, and 2006. Although the change in the rural population varied greatly among the departments, there has been a dramatic increase in the urban population at the provincial level. The major land-use changes between 1973 and 2006 were an increase in monospecific plantations of mainly Pinus and Eucalyptus of 2702 km² and a loss of 4689 km² of natural forest. Misiones possesses the largest remnant of continuous Atlantic Forest, which is famous for its high level of biodiversity and endemism, but much of this forest now comprises monospecific plantations. Although demographic changes in Misiones are similar to those that have occurred other regions (i.e., rural–urban migration), and the increase in forest plantations helps to maintain forest cover, this cover has much lower ecological value than that of natural forest. To ensure the conservation of the high-diversity Atlantic Forest in Misiones requires a better effort to understand the interactions among the diverse factors that affect land-use patterns in this region.