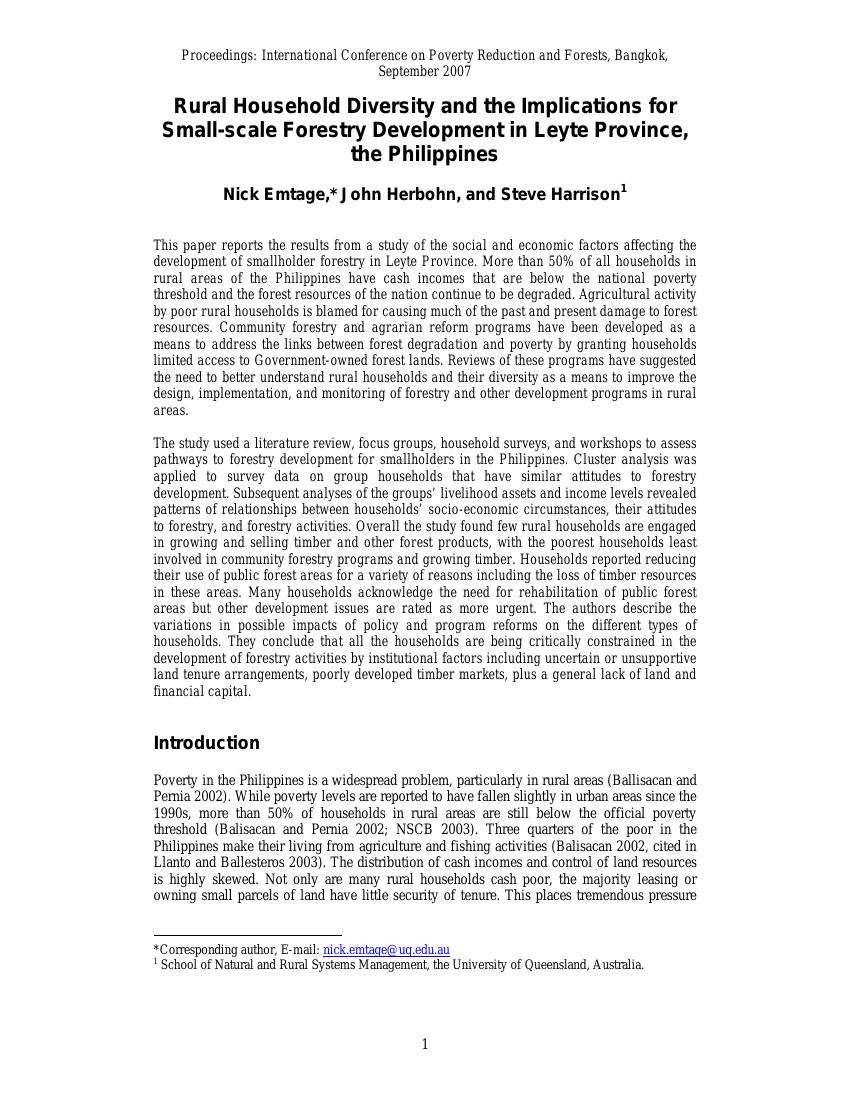 Rural household diversity and the implications for small-scale forestry development in Leyte Province, the Philippines

This paper reports the results from a study of the social and economic factors affecting the development of smallholder forestry in Leyte Province. More than 50% of all households in rural areas of the Philippines have cash incomes that are below the national poverty threshold and the forest resources of the nation continue to be degraded. Agricultural activity by poor rural households is blamed for causing much of the past and present damage to forest resources. Community forestry and agrarian reform programmes have been developed as a means to address the links between forest degradation and poverty by granting households limited access to Government-owned forest lands. Reviews of these programmes have suggested the need to better understand rural households and their diversity as a means to improve the design, implementation, and monitoring of forestry and other development programmes in rural areas.

The study used a literature review, focus groups, household surveys, and workshops to assess pathways to forestry development for smallholders in the Philippines. Cluster analysis was applied to survey data on group households that have similar attitudes to forestry development. Subsequent analyses of the groups’ livelihood assets and income levels revealed patterns of relationships between households’ socio-economic circumstances, their attitudes to forestry, and forestry activities. Overall the study found few rural households are engaged in growing and selling timber and other forest products, with the poorest households least involved in community forestry programmes and growing timber. Households reported reducing their use of public forest areas for a variety of reasons including the loss of timber resources in these areas. Many households acknowledge the need for rehabilitation of public forest areas but other development issues are rated as more urgent. The authors describe the variations in possible impacts of policy and programme reforms on the different types of households. They conclude that all the households are being critically constrained in the development of forestry activities by institutional factors including uncertain or unsupportive land tenure arrangements, poorly developed timber markets, plus a general lack of land and financial capital.
826 Views
66 Downloads