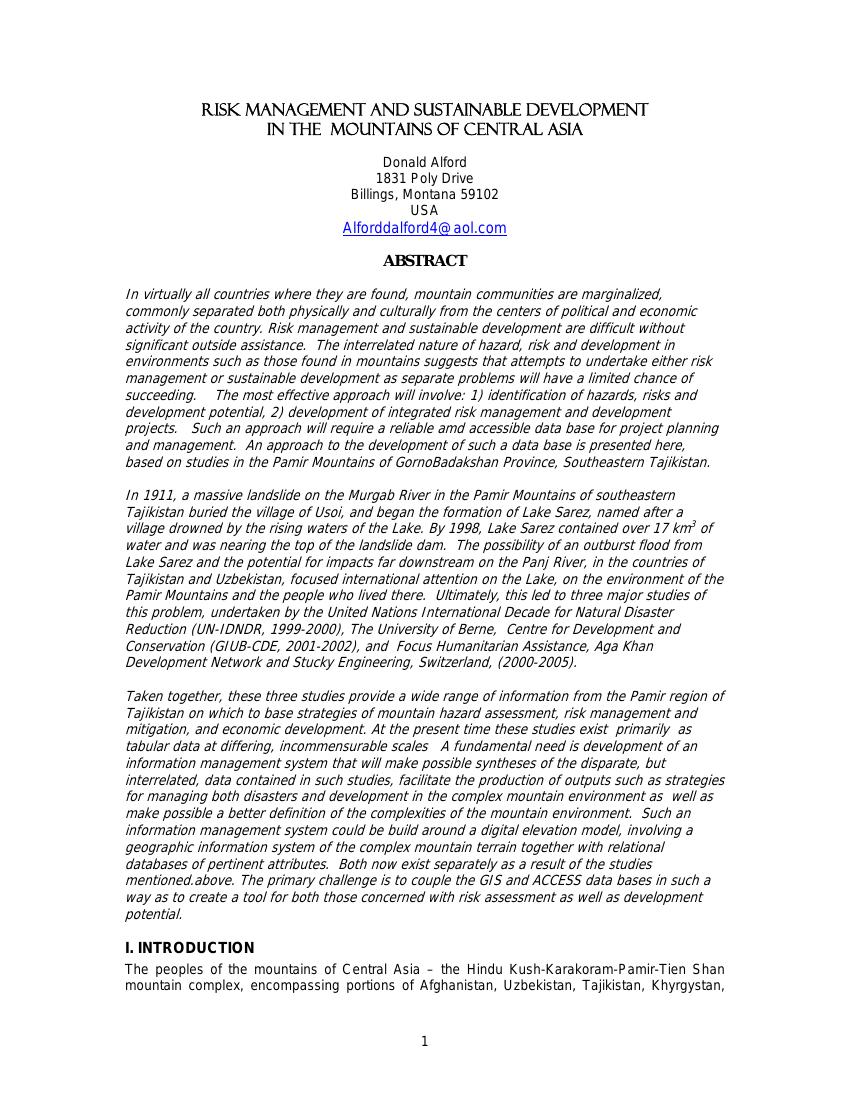 Risk management and sustainable development in the mountains of central Asia

In virtually all countries where they are found, mountain communities are marginalized, commonly separated both physically and culturally from the centers of political and economic activity of the country. Risk management and sustainable development are difficult without significant outside assistance. The interrelated nature of hazard, risk and development in environments such as those found in mountains suggests that attempts to undertake either risk management or sustainable development as separate problems will have a limited chance of succeeding. The most effective approach will involve: 1) identification of hazards, risks and development potential, 2) development of integrated risk management and development projects. Such an approach will require a reliable and accessible data base for project planning and management. An approach to the development of such a data base is presented here, based on studies in the Pamir Mountains of GornoBadakshan Province, Southeastern Tajikistan. In 1911, a massive landslide on the Murgab River in the Pamir Mountains of southeastern Tajikistan buried the village of Usoi, and began the formation of Lake Sarez, named after a village drowned by the rising waters of the Lake. By 1998, Lake Sarez contained over 17 km3 of water and was nearing the top of the landslide dam. The possibility of an outburst flood from Lake Sarez and the potential for impacts far downstream on the Panj River, in the countries of Tajikistan and Uzbekistan, focused international attention on the Lake, on the environment of the Pamir Mountains and the people who lived there. Ultimately, this led to three major studies of this problem, undertaken by the United Nations International Decade for Natural Disaster Reduction (UN-IDNDR, 1999-2000), The University of Berne, Centre for Development and Conservation (GIUB-CDE, 2001-2002), and Focus Humanitarian Assistance, Aga Khan Development Network and Stucky Engineering, Switzerland, (2000-2005). Taken together, these three studies provide a wide range of information from the Pamir region of Tajikistan on which to base strategies of mountain hazard assessment, risk management and mitigation, and economic development. At the present time these studies exist primarily as tabular data at differing, incommensurable scales. A fundamental need is development of an information management system that will make possible syntheses of the disparate, but interrelated, data contained in such studies, facilitate the production of outputs such as strategies for managing both disasters and development in the complex mountain environment as well as make possible a better definition of the complexities of the mountain environment. Such an information management system could be build around a digital elevation model, involving a geographic information system of the complex mountain terrain together with relational databases of pertinent attributes. Both now exist separately as a result of the studies mentioned.above. The primary challenge is to couple the GIS and ACCESS data bases in such a way as to create a tool for both those concerned with risk assessment as well as development potential.
1,730 Views
360 Downloads