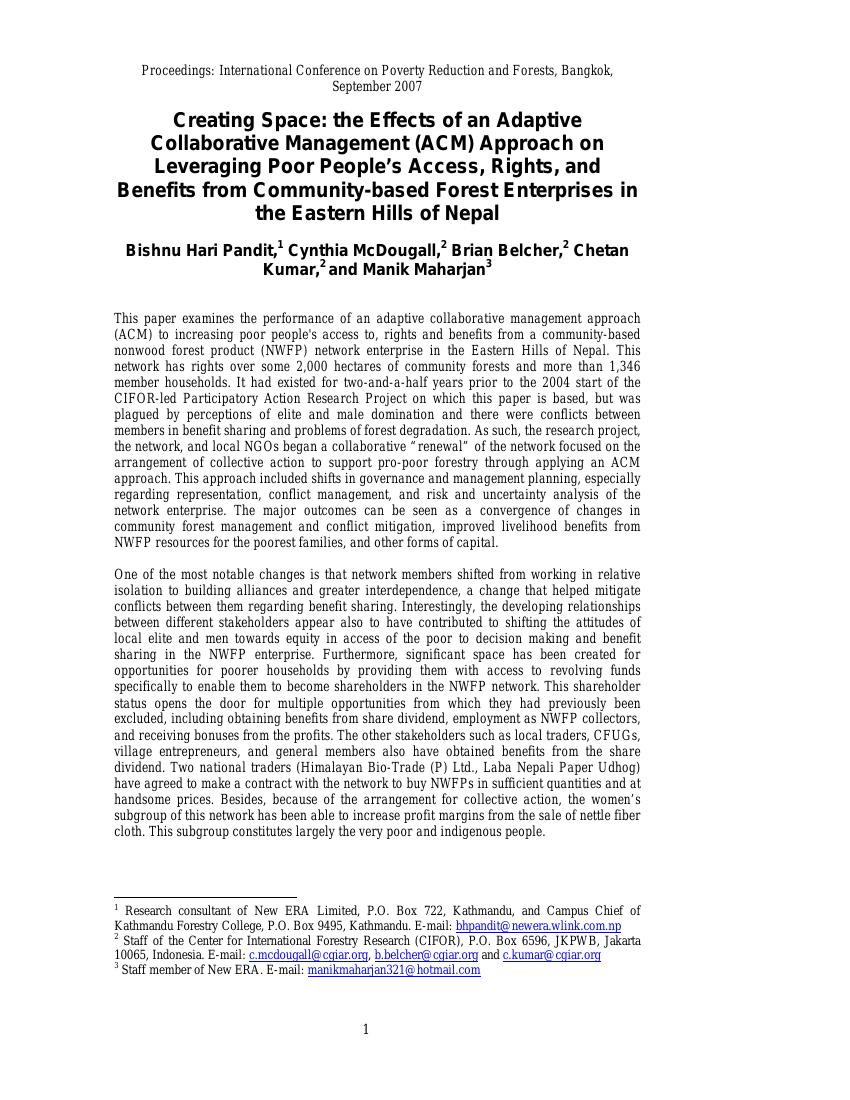 Creating space: The effects of an adaptive collaborative management (ACM) approach on leveraging poor people?s access, rights, and benefits from community-based forest enterprises in the eastern hills of Nepal

This paper examines the performance of an adaptive collaborative management approach (ACM) to increasing poor people's access to, rights and benefits from a community-based nonwood forest product (NWFP) network enterprise in the Eastern Hills of Nepal. This network has rights over some 2,000 hectares of community forests and more than 1,346 member households. It had existed for two-and-a-half years prior to the 2004 start of the CIFOR-led Participatory Action Research Project on which this paper is based, but was plagued by perceptions of elite and male domination and there were conflicts between members in benefit sharing and problems of forest degradation. As such, the research project, the network, and local NGOs began a collaborative “renewal” of the network focused on the arrangement of collective action to support pro-poor forestry through applying an ACM approach. This approach included shifts in governance and management planning, especially regarding representation, conflict management, and risk and uncertainty analysis of the network enterprise. The major outcomes can be seen as a convergence of changes in community forest management and conflict mitigation, improved livelihood benefits from NWFP resources for the poorest families, and other forms of capital.

One of the most notable changes is that network members shifted from working in relative isolation to building alliances and greater interdependence, a change that helped mitigate conflicts between them regarding benefit sharing. Interestingly, the developing relationships between different stakeholders appear also to have contributed to shifting the attitudes of local elite and men towards equity in access of the poor to decision making and benefit sharing in the NWFP enterprise. Furthermore, significant space has been created for opportunities for poorer households by providing them with access to revolving funds specifically to enable them to become shareholders in the NWFP network. This shareholder status opens the door for multiple opportunities from which they had previously been excluded, including obtaining benefits from share dividend, employment as NWFP collectors, and receiving bonuses from the profits. The other stakeholders such as local traders, CFUGs, village entrepreneurs, and general members also have obtained benefits from the share dividend. Two national traders (Himalayan Bio-Trade (P) Ltd., Laba Nepali Paper Udhog) have agreed to make a contract with the network to buy NWFPs in sufficient quantities and at handsome prices. Besides, because of the arrangement for collective action, the women’s subgroup of this network has been able to increase profit margins from the sale of nettle fiber cloth. This subgroup constitutes largely the very poor and indigenous people.