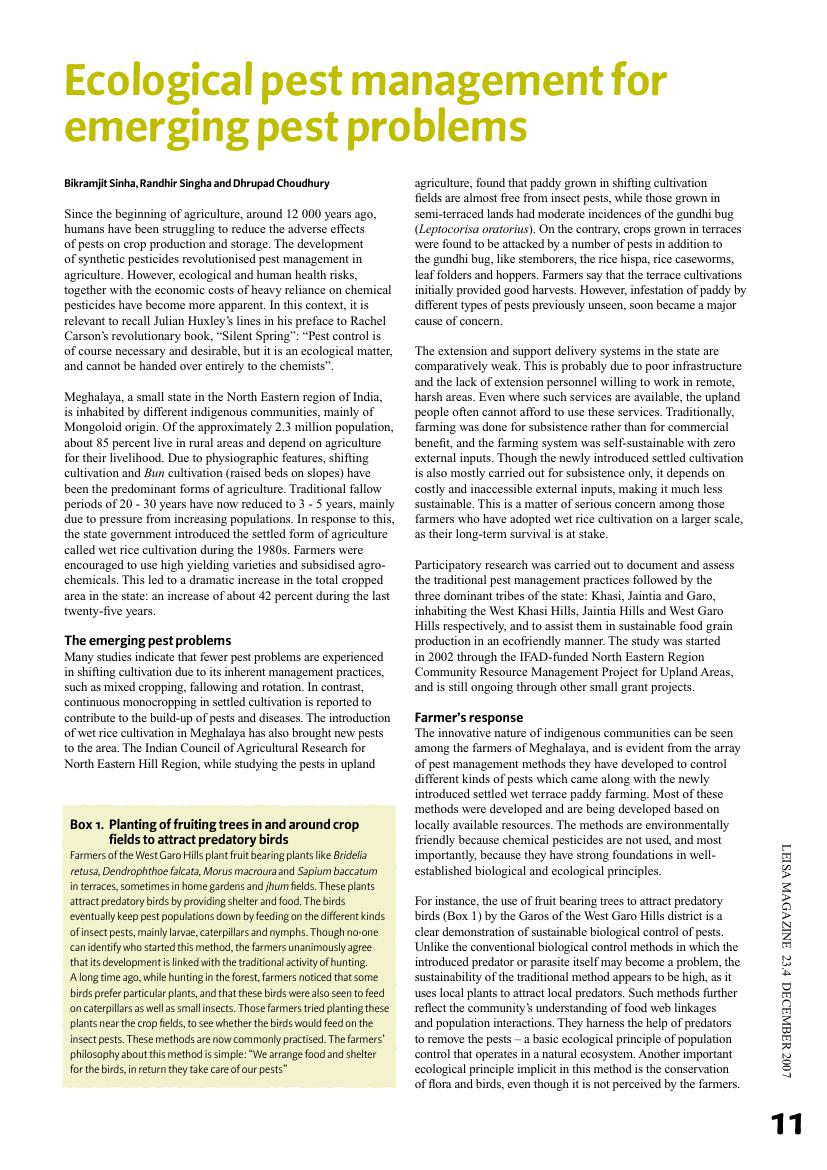 Meghalaya, a small state in the North Eastern region of India, is inhabited by different indigenous communities, mainly of Mongoloid origin. Of the approximately 2.3 million population, about 85 percent live in rural areas and depend on agriculture for their livelihood. Due to physiographic features, shifting cultivation and Bun cultivation (raised beds on slopes) have been the predominant forms of agriculture. Traditional fallow periods of 20 - 30 years have now reduced to 3 - 5 years, mainly due to pressure from increasing populations. In response to this, the state government introduced the settled form of agriculture called wet rice cultivation during the 1980s. Farmers were encouraged to use high yielding varieties and subsidised agrochemicals. This led to a dramatic increase in the total cropped area in the state: an increase of about 42 percent during the last twenty-five years. Many studies indicate that fewer pest problems are experienced in shifting cultivation due to its inherent management practices, such as mixed cropping, fallowing and rotation. In contrast, continuous monocropping in settled cultivation is reported to contribute to the build-up of pests and diseases. The introduction of wet rice cultivation in Meghalaya has also brought new pests to the area. The Indian Council of Agricultural Research for North Eastern Hill Region, while studying the pests in upland agriculture, found that paddy grown in shifting cultivation fields are almost free from insect pests, while those grown in semi-terraced lands had moderate incidences of the gundhi bug (Leptocorisa oratorius). On the contrary, crops grown in terraces were found to be attacked by a number of pests in addition to the gundhi bug, like stemborers, the rice hispa, rice caseworms, leaf folders and hoppers. Farmers say that the terrace cultivations initially provided good harvests. However, infestation of paddy by different types of pests previously unseen, soon became a major cause of concern. LEISA Magazine December 2007
1,512 Views
213 Downloads