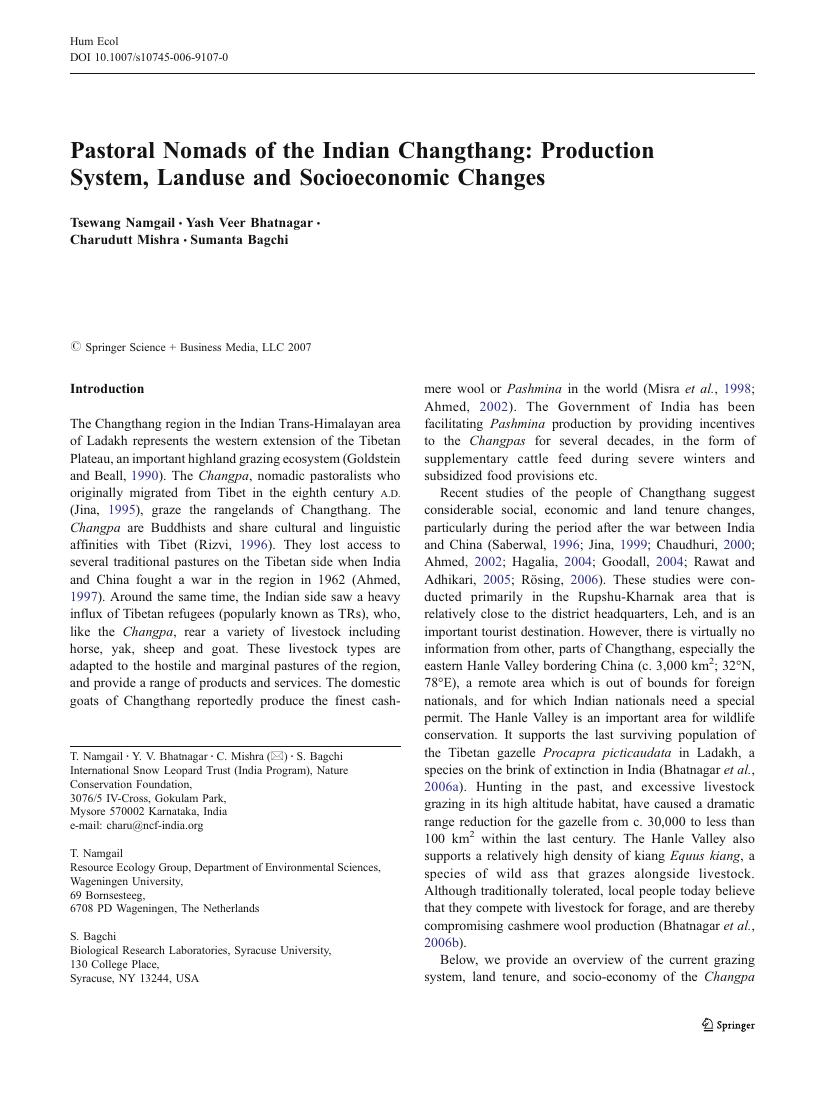 Pastoral nomads of the Indian Changthang: Production system, land use and socioeconomic changes

The Changthang region in the Indian Trans-Himalayan area of Ladakh represents the western extension of the Tibetan Plateau, an important highland grazing ecosystem. The Changpa, nomadic pastoralists who originally migrated from Tibet in the eighth century A.D., graze the rangelands of Changthang. The Changpa are Buddhists and share cultural and linguistic affinities with Tibet. They lost access to several traditional pastures on the Tibetan side when India and China fought a war in the region in 1962. Around the same time, the Indian side saw a heavy influx of Tibetan refugees (popularly known as TRs), who, like the Changpa, rear a variety of livestock including horse, yak, sheep and goat. These livestock types are adapted to the hostile and marginal pastures of the region, and provide a range of products and services. The domestic goats of Changthang reportedly produce the finest cashmere wool or Pashmina in the world. The Government of India has been facilitating Pashmina production by providing incentives to the Changpas for several decades, in the form of supplementary cattle feed during severe winters and subsidized food provisions etc. Recent studies of the people of Changthang suggest considerable social, economic and land tenure changes, particularly during the period after the war between India and China. A number of studies were conducted primarily in the Rupshu-Kharnak area that is relatively close to the district headquarters, Leh, and an important tourist destination. However, there is virtually no information from other, parts of Changthang, especially the eastern Hanle Valley bordering China (c. 3,000 km2; 32°N, 78°E), a remote area which is out of bounds for foreign nationals, and for which Indian nationals need a special permit. The Hanle Valley is an important area for wildlife conservation. It supports the last surviving population of the Tibetan gazelle Procapra picticaudata in Ladakh, a species on the brink of extinction in India. Hunting in the past, and excessive livestock grazing in its high altitude habitat, have caused a dramatic range reduction for the gazelle from c. 30,000 to less than 100 km2 within the last century. The Hanle Valley also supports a relatively high density of kiang Equus kiang, a species of wild ass that grazes alongside livestock. Although traditionally tolerated, local people today believe that they compete with livestock for forage, and are thereby compromising cashmere wool production.
1,435 Views
46 Downloads