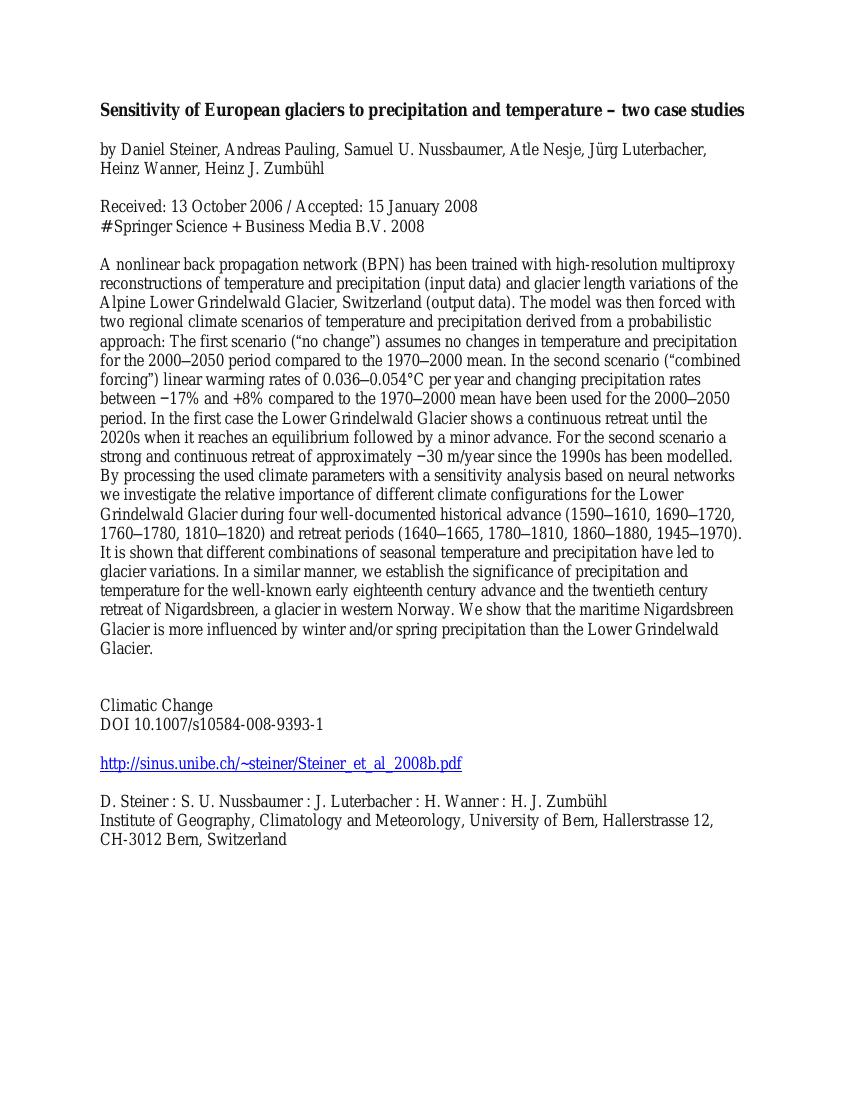 A nonlinear back propagation network (BPN) has been trained with high-resolution multiproxy reconstructions of temperature and precipitation (input data) and glacier length variations of the Alpine Lower Grindelwald Glacier, Switzerland (output data). The model was then forced with two regional climate scenarios of temperature and precipitation derived from a probabilistic approach: The first scenario ("no change") assumes no changes in temperature and precipitation for the 2000-2050 period compared to the 1970-2000 mean. In the second scenario ("combined forcing") linear warming rates of 0.036-0.054&deg;C per year and changing precipitation rates between -17% and +8% compared to the 1970-2000 mean have been used for the 2000-2050 period. In the first case the Lower Grindelwald Glacier shows a continuous retreat until the 2020s when it reaches an equilibrium followed by a minor advance. For the second scenario a strong and continuous retreat of approximately -30 m/year since the 1990s has been modelled. By processing the used climate parameters with a sensitivity analysis based on neural networks we investigate the relative importance of different climate configurations for the Lower Grindelwald Glacier during four well-documented historical advance (1590-1610, 1690-1720, 1760-1780, 1810-1820) and retreat periods (1640-1665, 1780-1810, 1860-1880, 1945-1970). It is shown that different combinations of seasonal temperature and precipitation have led to glacier variations. In a similar manner, we establish the significance of precipitation and temperature for the well-known early eighteenth century advance and the twentieth century retreat of Nigardsbreen, a glacier in western Norway. We show that the maritime Nigardsbreen Glacier is more influenced by winter and/or spring precipitation than the Lower Grindelwald Glacier. Access at http://www.danielsteiner.ch/GIUB/Steiner_et_al_2008b.pdf